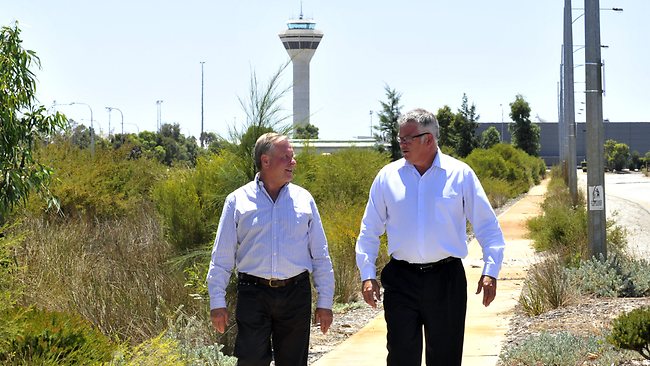 A liberal State Government has promised to build three new train stations bringing passengers to the front door of Perth Airport if it wins next months’ election at a cost of almost $2 billion.

It all but guaranteed that a rail line would be built out to Perth Airport regardless of next month’s election result, after Labor’s Metronet project promised to do the same.

Under the Liberal’s plan, three new train stations will be built along a new rail line, with stations to the east and west of the airport as well as underneath the existing main international terminal.

In announcing the major rail link project this morning, Premier Colin Barnett and Transport Minister Troy Buswell said the project would be completed by 2018 and would cost about $1.8 billion to build.

The new line will branch off the Midland train line at Bayswater station.

The two stations to the east and west of the airport will also have a combined total of 3000 car bays.

The eastern station will be located in Forrestfield and construction work would begin next year.

The Liberals will approach the Federal Government to help fund the project also.

“Every major city in the world needs a proper public transport system to its airport, Perth is no different, it’s a rapidly growing city and our airport has become one of the busiest in Australia,” Mr Barnett said, who conceded the proposal was high-priced.

“It’s an expensive project, but it will provide reliable and direct passenger transfers from the city directly to the airport terminals.”

That project, announced back December, consists of over 75km of new rail track and dozens of new train stations as well as rail lines to Ellenbrook and Perth Airport.

“If you are going to have a railway line that reaches the airport, the station has to be within the precinct of the airport terminal,” Mr Buswell said.

“Clearly, the Labor party rail plane is completely deficient in that regard.”

But Opposition leader Mark McGowan hit back at the Liberal party’s plan and its criticism of the Metronet project.

He labelled the Liberals’ announcement a “hoax” and said they “cannot be trusted to build a rail line to Perth Airport.”

“The Liberal Party will simply break this promise because they have no credibility on public transport,” he said.

More than 200 new rail cars would be purchased over the next eight years as part of the plan.

“Over the past eight years, the number of people boarding Perth trains has doubled, from 31.1 million to 63 million, according to the Public Transport Authority,” he said.

“The new trains will be new generation railcars, with state-of-the art technology and facilities.”