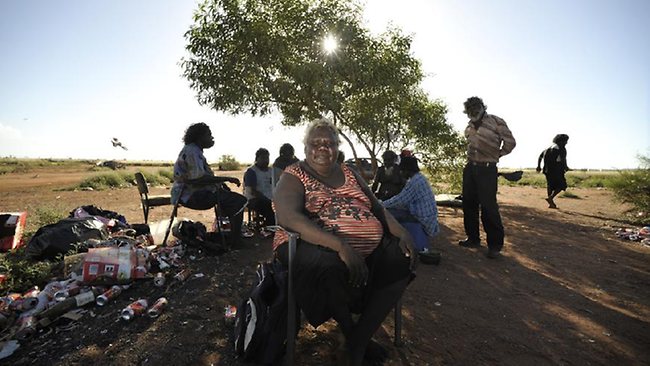 A 20-MINUTE drive from where real estate agents are touting a “new breed of luxury modernist apartments” to cashed-up employees of Port Hedland’s mining boom, members of Joanne Polly’s indigenous community sleep in the fields.

In South Hedland, as the Sunday Times recently discovered on a tour of the region, residents are dying of kidney and liver failure, and their children are inhaling petrol and aerosols.

While boomtown Port Hedland boasts $1 million bungalows and apartment blocks with “green credentials” and “specially designed to best capture solar access”, communities like South Hedland have all the solar access they want.

They have been waiting for up to a decade for public housing.

Living in squalor on the doorstep of Western Australia’s multi-billion-dollar resources rush where “fly-in fly-out” workers earn six-figure salaries is nothing new for these fringe dwellers.

What’s new is their lives are under the spotlight in a film, Utopia, due for international release by controversial expatriate Australian John Pilger.

Pilger, an award-winning television journalist who has lived in Britain since 1962, is a long time critic of Australia’s “racist” treatment of the Aboriginal population.

In this latest film Pilger says that “more than any other colonial society, Australia consigns its dirtiest secrets, past and present, to willful ignorance or indifference”.

While acknowledging that Australia “has changed” since he left the country, 73-year-old Pilger quotes from a history text he studied at school which described Aborigines as  “completely amoral” and which said “we are civilised and they are not”.

Rottnest was an Aboriginal prison between 1838 and 1931, but Pilger insists “Rotto is not the past” and quotes recent incarceration rates of indigenous children in WA.

Pilger’s spotlight on our international “shame” over Aboriginal welfare coincides with controversy in Western Australia over indigenous incarceration.

Last week, WA’s corrective services commissioner, Ian Johnson, resigned in the wake of a decision to place 140 children in an adult prison, following a riot in the young inmates’ juvenile detention centre in January.

On Friday, the Perth Supreme Court will hand down a decision over a legal challenge to the children’s transfer to the Hakea facility, made by Sydney human rights lawyer, George Newhouse.

In a piece written for The Guardian Pilger quotes a former prisons official’s claim that Australia is “racking and stacking” black Australians, whose incarceration rate is “five times that of black people in apartheid South Africa”.

AIHW Child Welfare and Prisoner Health Unit executive, Tim Beard, said that while the rate was stable, it “is extremely high and the message is that the over-representation of indigenous incarceration is consistent across every state and territory in Australia”.

Statistically in WA, one in every 14 indigenous men will spend tonight in police or prison custody.

In NSW, according to Attorney General, Greg Smith, indigenous male offenders currently account for 23 per cent of male inmates, while Aboriginal women make up 29 per cent of the female population in custody.

In juvenile detention, 48 per cent of young people in detention in NSW are of Aboriginal or Torres Strait Islander background.

Aboriginal and Torres Strait islander people comprise around 2.2 per cent of the total NSW population.

Australia is also the only remaining first world country where the eye disease trachoma – easily preventable with access to clean running water – still exists. It does so in remote Aboriginal communities.

In the Pilbara community, local Smith Family counsellor, Nia Hadenfeldt, who sleeps in her office because rents are too high, said she wanted a youth curfew because alcohol, drugs and aerosol sniffing were “destroying” Hedland’s youth, according to the article in the Sunday Times.

Bob Neville, chairman of the Pilbara Association of Non-Government Organisations, said in the article WA was “in the middle of the biggest resources boom we’ve ever seen, and locals have nothing to show for it”.

He called for an inquiry, saying, “every night they’re sleeping in the dirt on Gina Rinehart’s doorstep. They’re dying from alcohol, drugs, poor nutrition and suicide”.