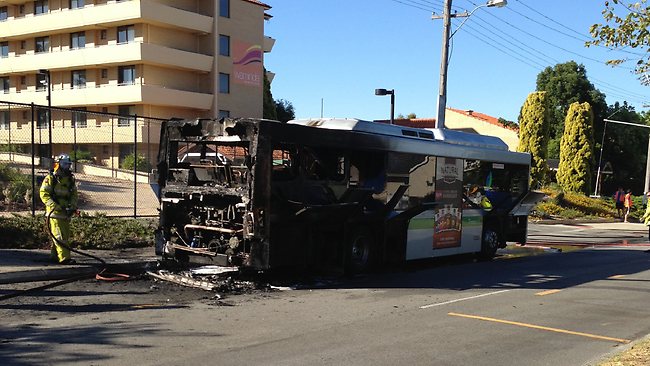 THERE are no plans to suspend Perth’s gas bus fleet despite two vehicles catching fire in two months.

A Transperth bus driver ordered about 20 passengers off a bus on Saturday afternoon when he saw a warning light on the dashboard.

The driver turned off the gas valve but the back of the bus soon caught fire.

It followed another incident on December 14 where a bus was engulfed in flames.

Transport Minister Troy Buswell on Sunday said there were no plans to suspend the fleet’s 500 gas buses.

He said a report on the first bus fire was delayed because it was “difficult, bordering on impossible” to determine what caused the blaze.

“That bus was effectively reduced to molten metal and that’s an issue,” Mr Buswell said.

“Yesterday’s fire wasn’t as catastrophic for the vehicle, so I’m very hopeful that we’ll be able to get a better understanding.”

Mr Buswell said he had implemented a five-point plan that included an inspection of all buses before they go out on Monday, an increase from one to two inspections a week, an examination of the capacity to improve fire suppression systems, an investigation into the latest fire and a meeting with the drivers union and the Public Transport Authority.

“As a person who has driven buses in a prior life, I can understand why the drivers and our customers are concerned, that’s why we’ve implemented this five point plan,” he said.