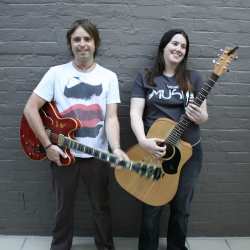 Traders in Acland Street say they fear a council ruling banning amplified music outdoors will erode the character of one of Melbourne’s famous tourist strips.

Bar and restaurant owners today said Port Phillip Council had banned music of all types being played outside businesses, and that two restaurants had been warned by council officers they were breaching rules in the past fortnight.

“No one wants anything that’s blaring or anything that’s offensive, but banning it completely dramatically affects the ambience and general vibe of the street,” Ms Dawson said.

“We’re meant to be a bustling precinct that’s busy and exciting. I guess as traders this is just another example of of the council setting unrealistic restrictions.”

Josh Burns, the manager of Amigo’s tapas bar, said a council officer had visited his business this month to order a stop to Latin music being played on a speaker outside.

Port Phillip councillor Serge Thomann said the council introduced the ruling in June 2010, following noise complaints made about amplified music in Acland Street. He said the council’s rules were in step with EPA guidelines.

Cr Thomann said traders had been encouraged to make a submission at the time but had failed to do so. He and mayor Rachel Powning could not say why the ban had only recently been enforced in the street.

Music has been a contentious issue in St Kilda, as live music has previously been banned in the suburb’s venues, including the Public Bar at the Prince of Wales Hotel, following noise complaints.

Acland Street traders will grill election candidates on the issue at a forum on Wednesday, October 24, when most of the 27 candidates running for election in the city this month plan to attend.

Candidate Jason Evans, who is running against Cr Thomann in the Catani ward, which covers Acland Street, described the music ruling as a “wowser council law” that was reducing the appeal of a “dying street”.