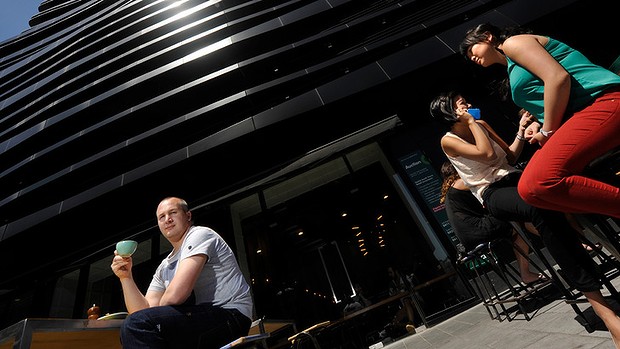 High-profile cafe and restaurant owners are being bombarded with calls from developers keen to secure a “destination” cafe or restaurant for the ground floor of new apartment blocks to appease increasingly picky buyers.

A simple convenience store or office is no longer enough – developers say a high-quality food and coffee outlet is now expected, alongside other feel-good extras such as rooftop gardens and communal spaces.

But hospitality experts say Melbourne’s cafe and restaurant market is already drastically over-supplied, and have warned potential operators to be wary of incentives such as free fit-outs or rent-free periods that might lure them into unprofitable locations.

Sites looking to capitalise on the pulling power of a high-profile tenant include Fridcorp’s lilli development in South Yarra, which is home to Two Birds One Stone (from the people behind Abbotsford’s Three Bags Full) and George Calombaris’ restaurant Mama Baba.

The owner of Two Birds One Stone, Nathan Toleman, has some experience in marrying his cafes with developments – his previous cafe, Three Bags Full in Abbotsford, was in the old Denton Mills hat factory, which is now a 60-apartment development with the original facade.

Mr Toleman says developers ring him each week to offer him sites, but he is cautious about the location and the long-term advantages of the area.

“We’ve always had destination cafes . . . but with an audience above, you can also create a sense of community, which people are looking for when they move into an area,” he said.

But restaurant consultant Tony Eldred warns the number of cafes and restaurants in Melbourne is unsustainable and the expectation of them being “almost compulsory” in any building was “becoming ridiculous”.

“The media have made rock stars out of cafes and chefs and there’s an enormous number of lemmings happy to throw money at it,” Mr Eldred said.

The population of the average apartment block falls far short of that needed to sustain a medium-sized cafe, which Mr Eldred estimates is about 7000 people in a 300-metre radius in a densely populated area.

The number of cafes and restaurants in the CBD has risen from about 800 to 1200 in a decade, according to property agent Knight Frank.

Emporia apartments developer Andrew Rice, director of PDA Australia, said buyers were keen on “urban lifestyle” and expected to be able to grab a decent cup of coffee on the way out.

“I don’t want [the development] to be something that landed from outer space, I want it to become part of the fabric of the location and to quickly become part of an eclectic mix,” Mr Rice said.