Melbourne getting waterwise on tourist transport 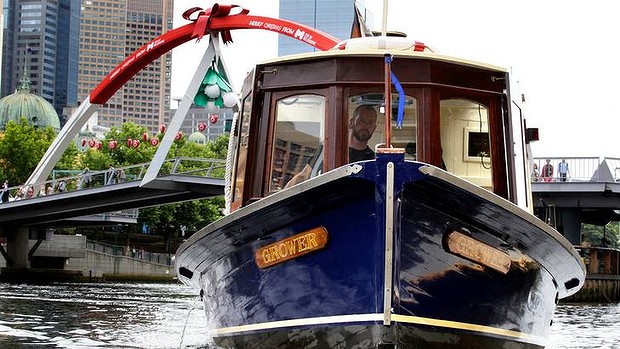 CATCHING a boat to go shopping, get a drink, go out for dinner or even get to work could soon become a part of Melbourne life.

A new ”city loop” ferry service that begins next Friday is only the first of three Melbourne water routes slated for the city.

The Baillieu government is spending more than $300,000 on a feasibility study for a ferry commuter service from Werribee South to Docklands, with possible stops at Point Cook, Altona and Williamstown. The study is due to be completed mid next year.

World Trade Centre taxi service on the Yarra with Hamish Turner at the wheel of ‘Grower’. Photo: Angela Wylie

Lord mayor Robert Doyle will also push next week for a plan to have a free ferry service from Central Pier in Docklands to the ANZ building on the north bank of the Yarra River included in Melbourne City Council’s four-year plan.

And next Friday a new ”city loop” summer ferry service will begin from WTC Wharf on the north bank of the Yarra River below Spencer Street, connecting to South Wharf, Southgate and Federation Wharf in front of the popular Riverland Bar at Federation Square.

The city loop service is being provided by WTC Wharf and owned and operated by Hamish Turner from his beautifully restored riverboat Grower.

The city loop is the first of three planned routes. Photo: Angela Wylie

Grower, which dates back to 1924, will make Yarra loop trips every half an hour from 4pm to 7pm on Fridays and on weekends between noon and 6pm, with a single trip costing adults $5 and children $2.

The Yarra loop service follows the successful ”float to the footy service”, where boat rides to and from WTC Wharf to the MCG were offered for $10 during the football season.

Cr Doyle said it was time that Melbourne embraced water transport. The new council-funded ferry service could run from Docklands to Federation Wharf, he said.

”We would look at it as a continuous looping shuttle … I think the demand is there, simply because of the growing population of Docklands,” he said.

Between 2006 and 2011 Docklands’ estimated residential population increased by 48 per cent to 6216 people.

Cr Doyle said it was time to link some of Melbourne’s increasing number of waterfront attractions on the north bank of the Yarra, in Docklands and at South Wharf.

”To get from one to another, you would not want to get back to Harbour Esplanade and try and drive it or walk to a tram … the obvious solution to link them all is by water transport,” he said.

Gavin Boyd, chief operation officer of Asset 1 WTC, said while the new Yarra loop service would begin as a tourism service he hoped it would develop into a commuter service also.

He said if the government’s plans for a ferry from Werribee to Docklands proved feasible, loop service could be extended to connect with the ferry service at Docklands and deliver commuters to the centre of the city.

Mr Boyd said there was no doubt the role of water transport in Melbourne would grow.

”We know that people like to take the water taxi because it is very easy, very simple,” he said.