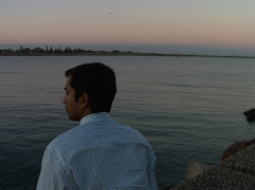 ‘Sunshine and Shade – Indian Students in Australia’ tells the real story of what its like to an indian student in Australia. Director Ana Tiwary said “They pay taxes even when they are students and help the tourism industry by encouraging family and friends to visit.”

Letting all their cultural experience go to waste when the students return disenchanted to India is a drain on our tourism industry.

THE director of a new documentary on Indian students in Australia believes this country is wasting their talents.

Ana Tiwary, whose film Sunshine and Shade: Indian Students in Australia will have its world premiere at the Parramasala festival on Friday, said thousands of talented young Indians would return home at the end of the year, disenchanted by the lack of opportunities here.

”These students bring a fresh approach to the workforce; they have access to other markets and investment opportunities in rising Asian markets; they are mostly bilingual and have a global perspective; and they have the cultural know-how to build stronger ties with neighbouring Asian countries,” she said.

”They pay taxes even when they are students and help the tourism industry by encouraging family and friends to visit.”

Tiwary originally planned to make a film about Indian students who had been attacked in Australia, but she discovered that not only did these students want to put those attacks behind them, some did not believe they were entirely racially motivated.

”Racism was not the only factor in the attacks; research found that where students live, where they worked and how they travelled and carried cash made them easy targets,” she said.

”The motivation a lot of times is young boys who are just looking for trouble and some money. Indian students don’t retaliate a lot of times and they don’t want the police involved.”

Tiwary decided to look instead at why the students were targeted, which gave her an insider view of their Australian experiences.

The film focuses on Kanishk Kumar, who applied for more than 60 jobs without one interview after finishing an MBA in Newcastle, and Sharn Chahal, who shared a small flat with six others, and washed dishes and cleaned houses while studying IT and accountancy in Auburn.

Both were keen to stay in Australia – Kumar temporarily and Chahal permanently – but they faced visa problems. Tiwary said that recent changes to the skilled migration program meant thousands of well-trained and enterprising international students would have to leave when their visas expire on December 31.

The federal government has recently encouraged Indians to work in the mining sector and to do postgraduate research.

However, unless it became easier for companies to sponsor students, they would not be able to stay, Tiwary said.

”Australia has the most qualified cab drivers and waitresses because people can’t get jobs based on their qualifications,” Tiwary said. ”Once they graduate, they should be getting jobs that they’re qualified for.”