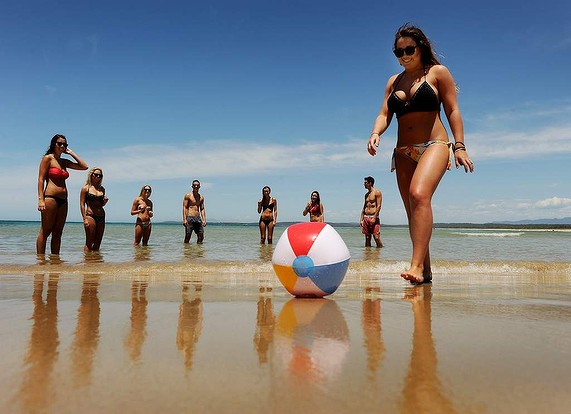 From The Canberra Times

Tourism and economic development manager of Eurobodalla Shire Council Andrew Greenway said operators in the region were building from a better off-season position and were preparing for a boom summer season.

‘‘Anecdotally people have been having a good last three months- so it should continue for the next three months,’’ Mr Greenway said.

The National Visitor Survey released Wednesday showed a two per cent drop in domestic overnight trips in the September quarter, with a strong Australian dollar and cheap fares to the US and Asia blamed for some of the downturn. Hotel occupancy rates at beach holiday destinations were 49 per cent compared to 78 per cent in capital cities.

Mr Greenway said the shire’s population was expected to triple over the holiday period. Normally the population sits at 37,138 but he said an additional 74,000 people would make the area ‘‘home’’ for the Christmas and New Year period.

‘‘For the Christmas period we are experiencing strong demand, we always do. And people are struggling to find accommodation in some areas already in early January which is a good sign.’’

But he warned that weather conditions at the end of January would dictate a boom or average season.

‘‘The crux is weather at the end of January – with a sunny period there is a significant jump in occupancy.’’

Theresa Matthews owns two businesses in Mogo. For the Christmas rush she increases candy stock at her lolly shop by 60 per cent.

‘‘You have to make your money now – with both of my stores I close them down after the June long weekend for Monday, Tuesday , Wednesday, so we only trade four days,’’ Ms Matthews said.