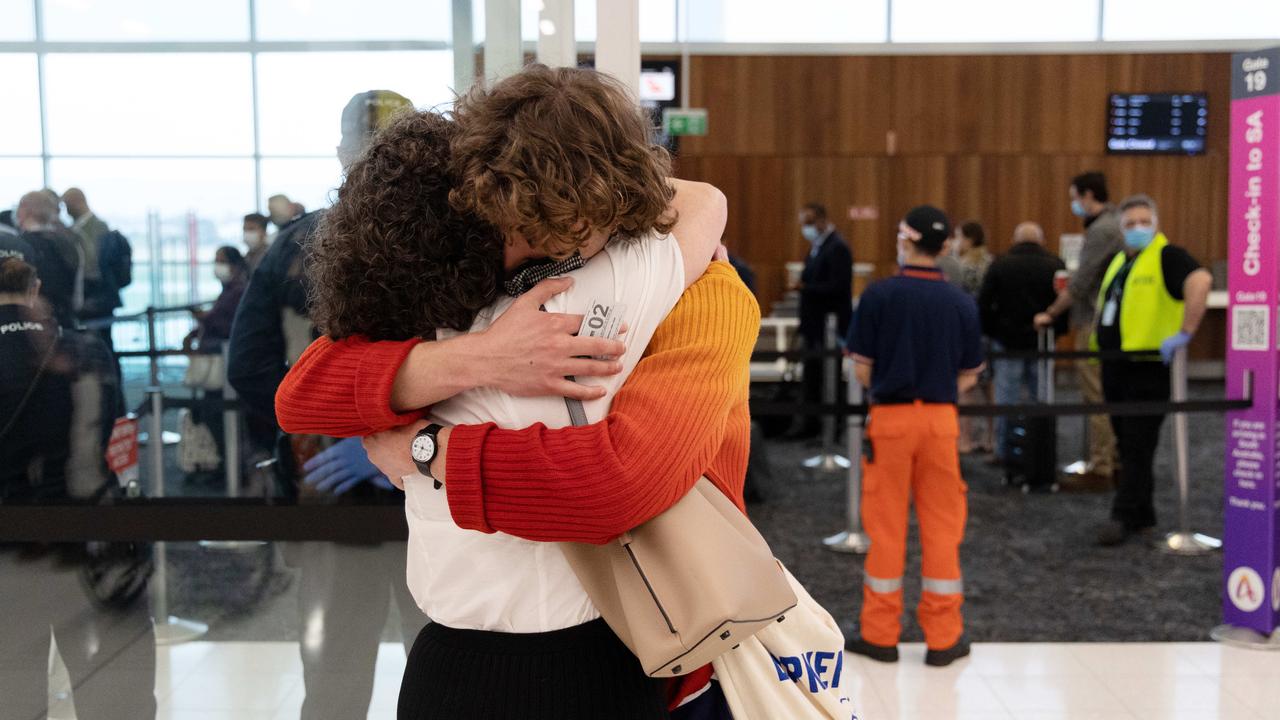 Signs of pure joy came to airports and border crossings across South Australia, as the state opened its borders to the east coast states. As many were able to meet loved ones they have not seen in months or years, some amazing stories were reported.

A flight arriving at Adelaide Airport from Melbourne at 8.25am on a drab, wet Tuesday morning in November used to be a mundane occurrence. Not worthy of a second thought.

Not any more. QF763 was not your everyday arrival. It was the start of a new era for South Australia as the state once again opened its borders to NSW, Victoria and the ACT.

It’s an era with the capacity to provide both joy and trepidation. At least some of the people entering SA will be bringing Covid with them. But that’s for the future.

For those inside the newly expanded Adelaide Airport terminal there was only the here and now. The emotional joy of reunion, the physical pleasure in hugging a parent, a partner or a child for the first time in months or years.

The airport was awash with stories. There was Mary Clarke, of Melbourne, who got to hold her granddaughter Arabella for the first time.

She was born in August to Ms Clarke’s daughter Danielle Brides – and is Ms Clarke’s first granddaughter. An overjoyed Mary Clarke holds her excited granddaughter Arabella at Adelaide Airport on the first day of the border opening to the rest of the country. Picture: NCA NewsWire / David Mariuz

“That’s the first time I’ve seen that little girl in person,” Ms Clarke said. “We’ve been doing lots of Facetime so I speak to that little girl every day – I was bursting to see that little face and had great expectations and it was just wonderful.”

Ms Clarke, known as jida – the Arabic word for grandmother – will spend a little quality time with her granddaughter until Friday

“But now we can go back and forth, that’s the plan.” Qantas flight attendant Christopher Leach was in tears as he hugged his father and spoke about his long 290 days in lockdown in Victoria.

“Mentally, emotionally you are just absolutely drained,” he said.

Adam Nelson had been separated from wife Ellie, as well as Max, 4, and Archer, 3, for four months, while working as a cardiologist at Monash Hospital. Dr Nelson said he had missed the birthdays of his sons while stuck in Melbourne.

“My wife has been mum and dad for the last few months,’’ he said.

Former Advertiser journalist Anna Cock has returned from Japan where she had been living with her husband David Gibson and their three children.

Ms Cock was met by her parents Leon and Jenny who had not seen their daughter for two years. “We have been away a long time and we are really happy to be home,” she said.

There were all sorts of stories as passengers filed through the airport, completed their formalities and walked and ran into the arms of loved ones.

Michelle Deslands and Shannon McNamara were reunited after four months to resume a relationship that had barely started before the concreter was marooned in Sydney.

Isabella Hill, 22, a nurse at the Royal Adelaide, had not seen her partner Hung Nguyen, 22, for a year after the physio student returned to see family in Texas. “I feel so nervous,’’ she said, legs shaking, as she waited for his appearance. 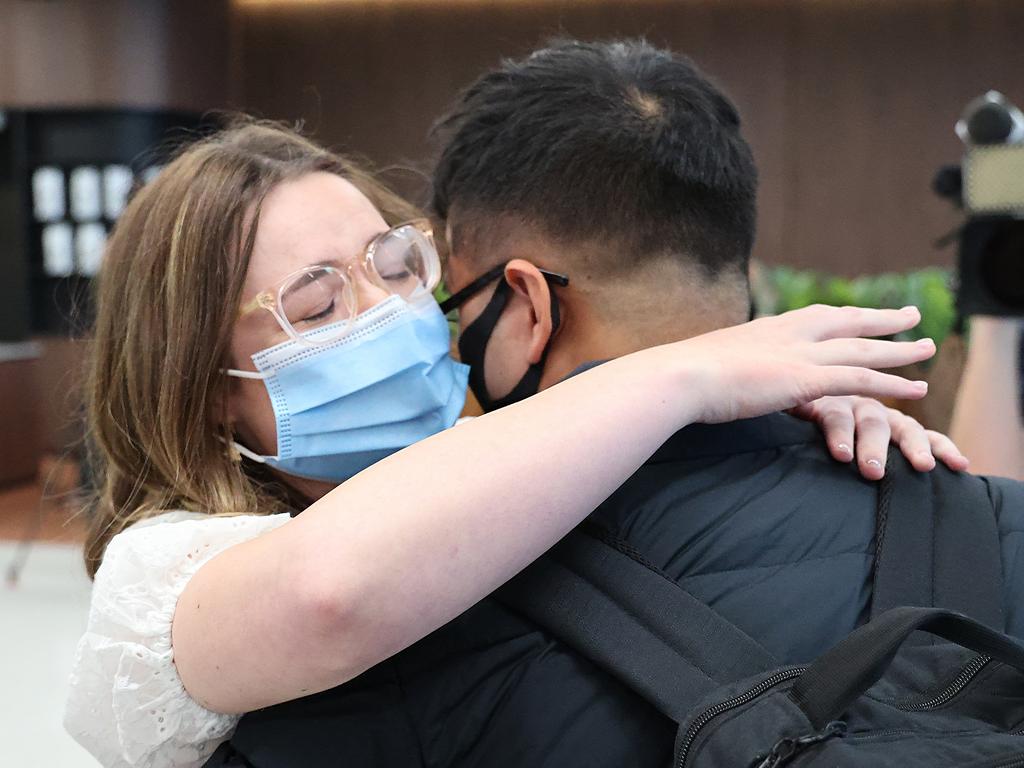 After the reunion, Mr Nguyen said he was just “happy to be back, very lucky’’.

“I’ve been trying to get here since I left, so its been quite a journey.

Premier Steven Marshall help a press conference at Adelaide Airport on Tuesday and and said he was confident “at the end of the year we’ll be at that magical 90 per cent” of over 12s vaccinated.

He said second dose vaccination rates for South Australia were set to hit 79 per cent by the end of Tuesday, and just over 88 per cent were expected to have had their first dose.

He said the final LGA in NSW – in Byron Bay – have hit above the 80 per cent requirement, meaning those residents can travel here without quarantining if they are vaccinated. Mark Oliver arrives on the first flight from Sydney, and holds his granddaughter. Picture: Naomi Jellicoe 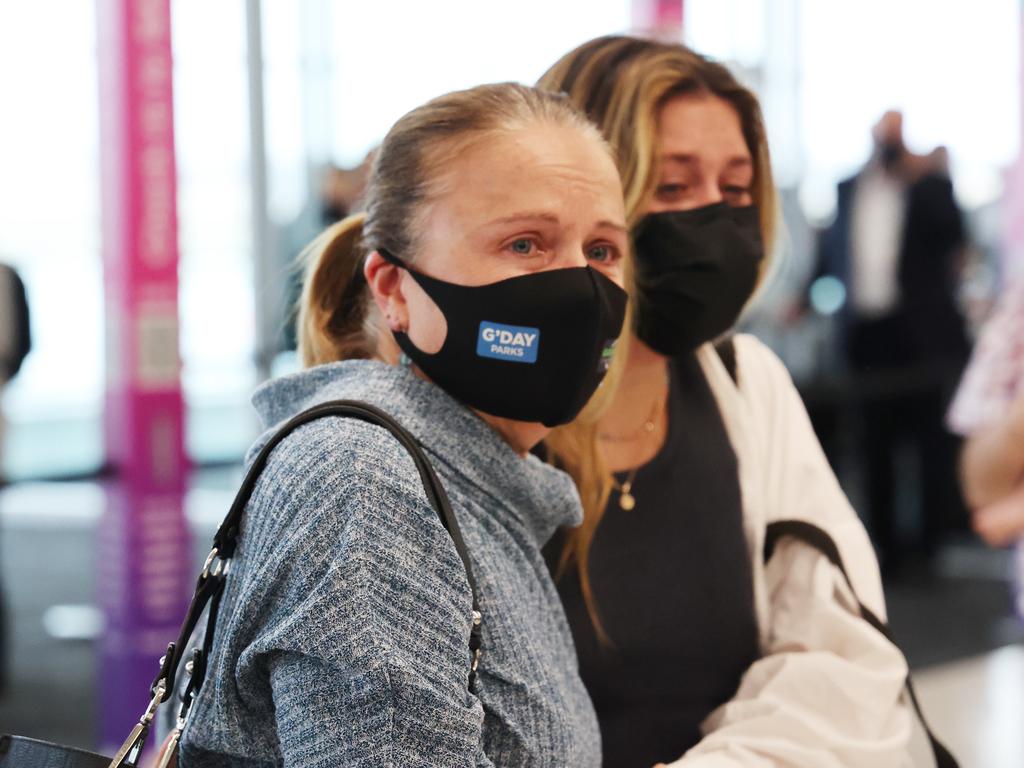 Anna Cock is reunited with her parents Jenny and Leon at Adelaide Airport. Picture: Naomi Jellicoe

He said all LGAs in NSW, Vic and the ACT were now over 80 per cent.

“43,000 applications have been processed through that portal – I think people are so delighted they can finally back into South Australia, reunite with family and friends, look for those business opportunities and importantly, customers can come back to South Australia and spend in our economy,” he said.

Since the announcement of borders opening there had been a six-fold increase in bookings and from next month our first international flights – from Adelaide to Delhi in India – would kick off. 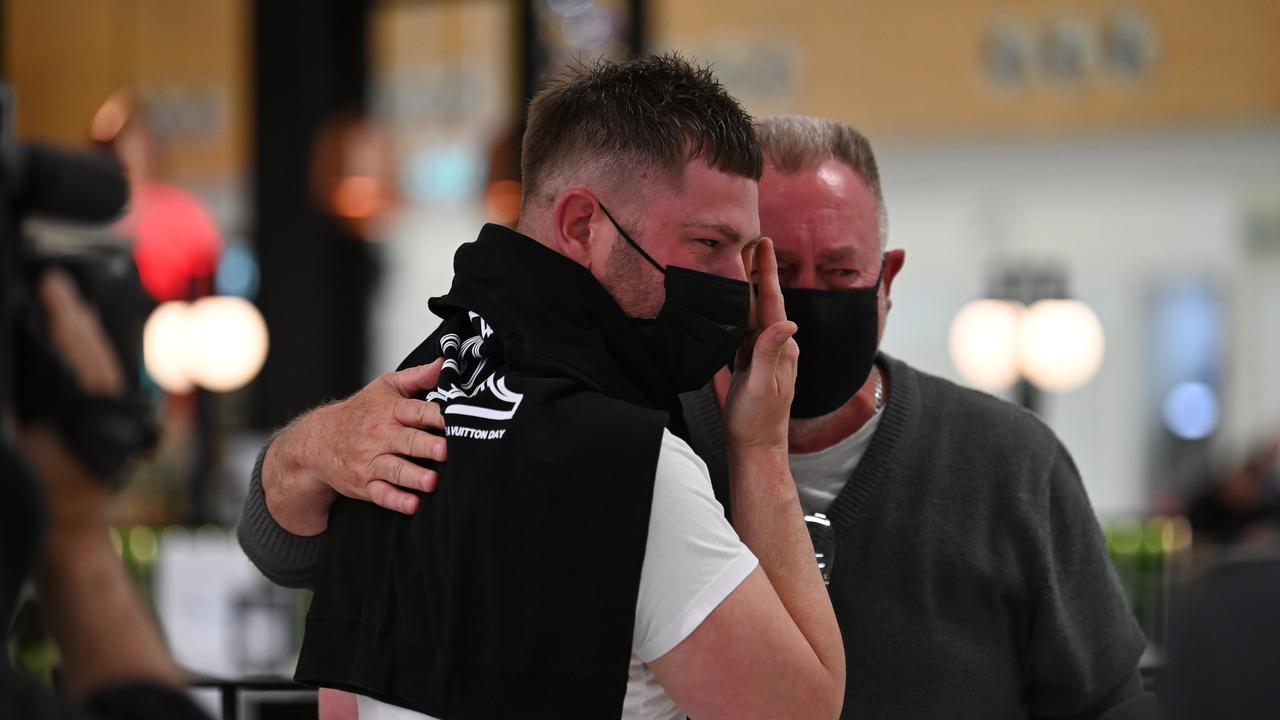 Chris Leech who lives in Melbourne is reunited with his dad Steven. Picture: Naomi Jellicoe

AT THE YAMBA CHECKPOINT THERE WERE TEARS – OF JOY AND DISTRESS

There were similar scenes of joy at SA’s Yamba border checkpoint on Tuesday, as the borders opened at 12.01am.

About 10 cars crossed the border within the first half an hour of opening and – although technical difficulties caused frustration for overtired, homesick people – there was also plenty of happiness and relief.

Returning resident Kerry Henstridge, 66, of Barmera, burst into tears as she told how excited she was to return home and hug her daughter and meet her grandson Logan for the first time.

“I’ve got a little baby grandson who was born five days after I left and I haven’t met him or had cuddles,” Ms Henstridge said.

Another excited motorist said he was “going home to get f****** pissed” and drove off tooting his horn.

Peter Edwards, 58, of New South Wales, had not seen his elderly mother in 15 months, and was champing at the bit to give her a hug.

“I am incredibly excited to see my mum,” Mr Edwards said. 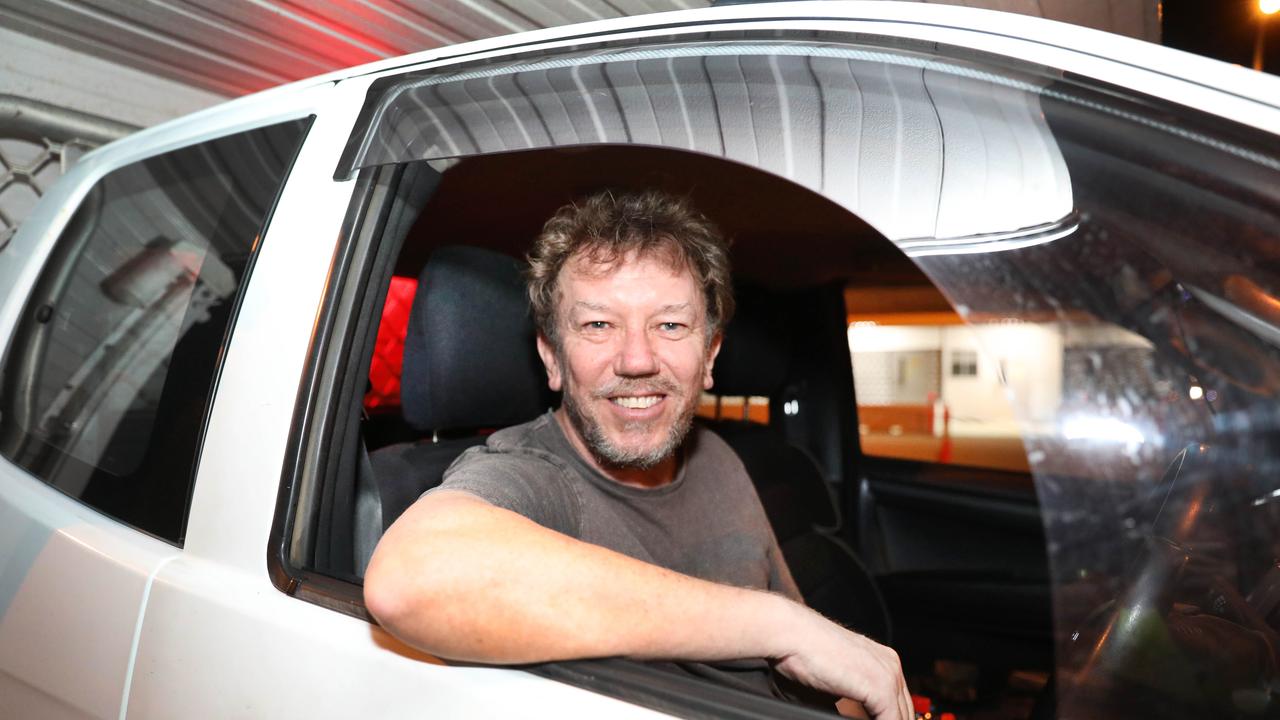 At the checkpoint near Yamba was Peter Edwards, who came from Nowra NSW, and hasn’t seen his mum for 15 months. Picture: Dean Martin

On Tuesday morning, excited entrants continued to pass through the Yamba border checkpoint.

Three Victorian friends, Lauren Vallely, Zoe Lysaght and Izzy Galloway, all 23, decided to come to SA as soon as the border opened to soak up South Australia’s tourism hot spots.

Following the Victorian trio across the border was Peta Robinson, 33, who lived in Newcastle, NSW for seven years before she returned home to SA on Tuesday morning to begin work at Yalumba Estate winery in the Barossa.

Ms Robinson said she was excited to be home and to catch up with friends and family after being forced to miss important events such as weddings and the birth of her friends’ children.

“It’s been tough not being able to be here for weddings, and you know, births … my best friend had a baby eight weeks ago,” she said.

“How do you describe home? It’s just that feeling, that warmth of familiar places, the roads, you know.”

Ms Robinson said she was also looking forward to surfing around SA.

She said the border entry process was “very seamless”, unlike the experiences of many people attempting to enter at midnight on Tuesday.

“I actually thought it would be a lot harder,” she said.

Earlier, new mother Kate Trescowthick spoke about how emotional she will feel when she finally introduces baby daughter Matilda to her extended SA family.

Melbourne-based Mrs Trescowthick is returning home on Thursday for the first time since giving birth in July, and said the long-awaited reunion was sure to be emotion-charged.

“I’ve been waiting to start my own family for years so everyone’s very excited,” she said.

“I think it will be like a scene out of Love Actually at the airport, there will be lots of tears and hugs. 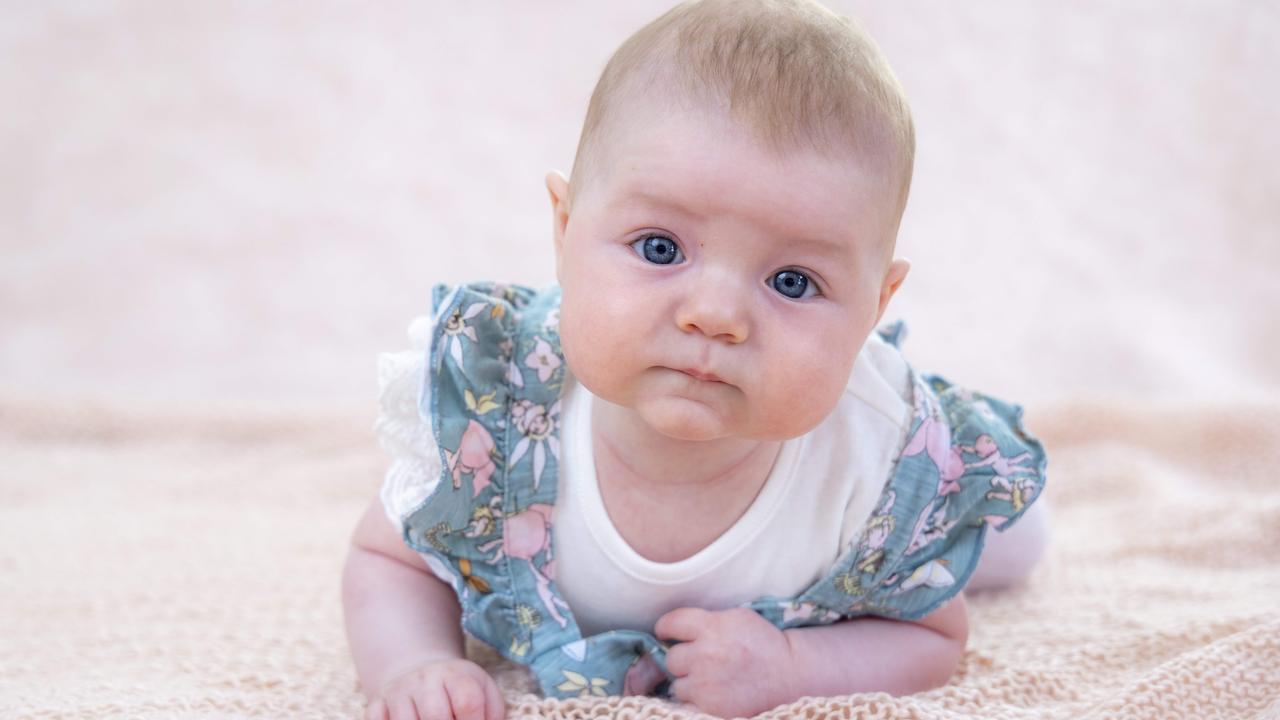 Four-month-old Matilda Trescowthick hasn’t met her extended family yet – but she and her mother Kate fly to SA on Thursday for the special moment. Picture: Wayne Taylor

“She (Matilda) has changed so much from when she was a newborn and it’s sad that everyone’s missed that newborn stage … so I’m thrilled we’re able to get back before she changes too much more and my family can still enjoy that special baby stage.” “Granny is beside herself. She’s just itching to get to meet Matilda. I think that bond between me and Granny is very special because I’m her first grandchild,” she said.

“We’ve got a very special connection and she’s very excited to continue that across another generation.”

A Melbourne resident for the past eight years, Mrs Trescowthick, 38, said she understood concerns about opening up SA’s borders but said there was a lot of “unnecessary fear” surrounding the situation.

“I know there’s been a lot of hesitation about opening up the borders. As a new mother with an unvaccinated baby I definitely understand and empathise but we’re just desperate to reunite with our family,” she said. Kate Trescowthick with her parents. Picture: Supplied by Family

“As long as everyone is vaccinated and takes responsibility for their own health and is sensible and washes their hands and follows the guidelines, I think we should be fine.”

Her parents, Sue and John Elliott, were in Melbourne soon after Matilda’s arrival and stayed for two weeks before returning to quarantine in SA in late July.

Mrs Trescowthick admitted navigating motherhood for the first time without family had been difficult.

“Having a newborn is hard at the best of times but without that family support during lockdown was another challenge,” she said.

“I couldn’t have friends pop in, we couldn’t have visitors but on the other hand, it’s been a very special time to bond with Matilda and build that relationship with her.”