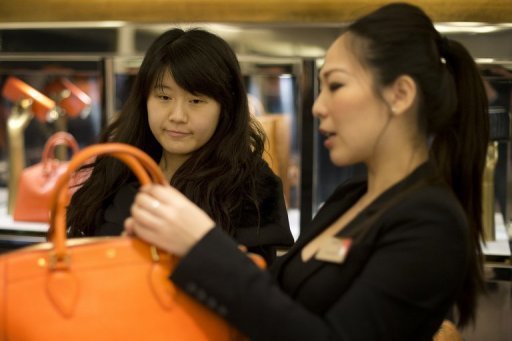 With their shelves spilling over with festive goodies, London’s department stores are working hard to attract Christmas shoppers — but Chinese visitors are the particular target of a charm offensive.

Hotels, retailers and the government are stepping up efforts to woo big-spending Chinese visitors in a bid to bounce back from Britain’s longest recession in half a century.

Congee and dumplings are on the breakfast menu at enterprising hotels, major London stores have installed Chinese bank card terminals, and Mandarin-speaking staff are on hand to help out with the Christmas shopping.

Britain is courting Chinese travellers not only because they are a rapidly growing market — they made an estimated 70 million overseas trips in 2011, up 20 percent in just a year — but because they are serious shoppers.

“My goodness, they spend,” said Patricia Yates, director of strategy for the VisitBritain tourism authority.

“So they’re very welcome by the retail industry at the moment, who have seen domestic demand soften.”

A Harrods spokeswoman said jewellery and watches, fashion and fine wines were top of the shopping list for many Chinese customers.

“They seek out the very latest, limited edition and exclusive products,” she told AFP.

Beneath the twinkling Christmas lights on London’s central shopping artery Oxford Street, too, Chinese shoppers were on the lookout for designer items.

“We think London is the capital of fashion,” said Harry Gao, a fashion student from the eastern Chinese city of Wenzhou, who was wrapped up against the drizzle in a fur coat and gold trainers.

“Lots of famous designers are from the UK. It’s lots of fun.”

A record 149,000 Chinese visitors came to Britain last year, bringing some £240 million to the struggling economy.

But Britain’s share of the coveted Chinese market is poor compared to several competitors in mainland Europe including France, which welcomed nearly a million tourists from China last year.

“We know that our European rivals do much better than us,” Yates admitted. “We really want to break the Chinese market.”

The complex British visa system is frequently blamed for the shortfall.

While Chinese tourists can visit 26 European countries on a single “Schengen” visa, a trip to Britain requires a separate visa involving lengthy forms in English as well as additional costs.

Interior minister Theresa May confirmed Wednesday that the government is looking at expanding online applications and making some visa forms available in Mandarin, as well as introducing an express service for premium travellers.

Meanwhile, the government is throwing £8 million at luring an additional 233,000 Chinese visitors a year by 2020, and VisitBritain sent its biggest-ever delegation to Shanghai last month to drum up business.

Over a Chinese breakfast of congee (rice porridge), steamed buns and warm soya milk at London’s Landmark Hotel, marketing manager Yan-Ping Mew said he has had “very good feedback” since the meal became available to guests earlier this year.

The hotel also recommends smartphone apps to help Chinese guests navigate London and allocates them room numbers traditionally seen as lucky, such as those on the third or eighth floor.

“The Chinese tend to be slightly more superstitious,” Mew explained.

He added that while many Chinese guests come to London to shop, they also want to see the sights and, in some cases, visit prospective universities for their children.

Yates also insisted that Britain had more to offer than shopping.

“There’s the history and tradition of our royal family with palaces that you can go and see, great museums that have world-class treasures,” she told AFP, adding that the London Olympics had been “an amazing showcase”.