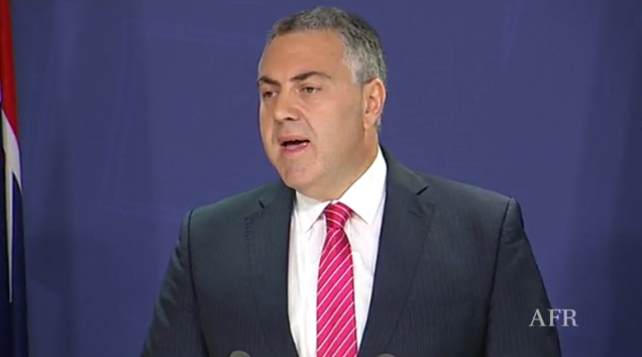 The federal government will “carefully consider all of the options” available to help Qantas Airways should Australians want to retain a national carrier with restrictions on foreign shareholdings, says Treasurer Joe Hockey.

The Australian Financial Review reported on Friday that there were several options available that could help shore up the airline’s credit rating without removing the foreign ownership restrictions of the Qantas Sale Act. 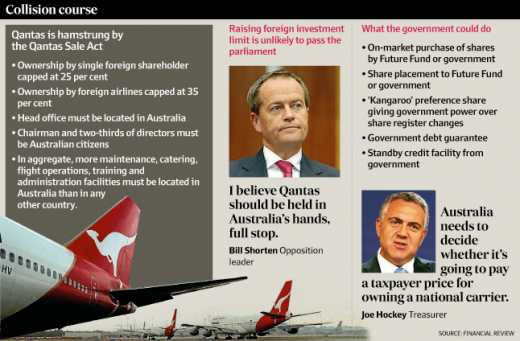 A government buyback of up to 10 per cent of Qantas by itself or through the Future Fund has emerged as the most likely option. Other options could include a share placement, a “Kangaroo” preference share, a government debt guarantee or a standby credit facility from government.

Qantas is asking the government for urgent help amid fears the loss of its credit rating could cost it $2 billion in liquidity and leave it ill-equipped to continue its fight against Virgin Australia Holdings in the domestic market. Virgin is backed by deep-pocketed foreign airlines Air New Zealand, Singapore Airlines and Etihad Airways.

On Friday, Qantas released October operating statistics which showed its yields, or returns on fares, had continued to fall on domestic and international routes during that period due to continued capacity growth and weak market demand.

The airline’s load factor, or the percentage of seats filled, fell 2.1 percentage points to 77.7 per cent versus the same month a year ago.

With market conditions appearing dire, it is believed Qantas would like the cabinet to decide on the form of help before Christmas. Mr Hockey has not given an indication on the timing, but he has hinted a decision could be forthcoming soon.

”The fact of the matter is these issues need to be dealt with,” Mr Hockey told reporters on Friday. “I am not someone who is prepared to kick the can down the road on issues. If decisions need to be made, they will be made.”

His comments came as his Labour counterpart Chris Bowen accused Mr Hockey of acting irresponsibly by slating changes to foreign ownership restrictions in Qantas in a move that shifted the airline’s share price.

“What’s not appropriate is for the Treasurer to float big ideas… which are market sensitive, which saw the Qantas share price move and it’s quite irresponsible and frankly naive for him to do that,” Mr Bowen told ABC Radio on Friday.

Qantas shares surged more than 5 per cent at one stage on Thursday before ending 3.6 per cent higher at $1.22 after news broke of Mr Hockey comments.

Launching a discussion paper or white paper would have been the more responsible approach to the issue, Mr Bowen said.

Current laws require there be a majority Australian shareholding in Qantas as part of a deal that gives the national carrier privileges including air space priority.

The government and opposition have both indicated a desire for Qantas to remain an Australian entity.

Mr Bowen said Labor would continue to talk with the airline and consider any sensible proposal put forward by the government.

“But we wouldn’t give a blank cheque to any particular outcome,” he said.

“We do need to have a national airline,” he said.

“When Australians have been in trouble overseas, it’s been Qantas that has been prepared to provide assistance to evacuate people from the Middle East or Thailand.”