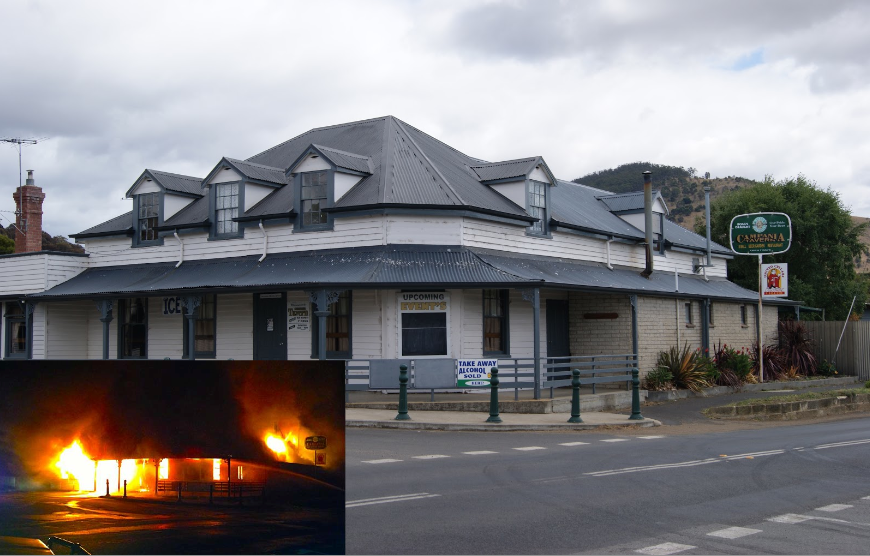 THE fire that destroyed the historic Campania Tavern was deliberately lit, police say.

Engineers said the historic facade of the tavern would have to be torn down.

But the building’s owners have pledged to rebuild a hotel on the site.

Police maintained a day-long presence at the site as their investigation continued yesterday.

“We are pleased with the quality and quantity of information we are getting,” Insp Joel said.

Locals lit a fire in the carpark across the road on Wednesday night to celebrate the life of the hotel in a Campania-styled wake.

They shared a few beers and stories and tears for the much-loved pub.

General store owner Rhonda Rice said up to 50 people came and went in the pouring rain to remember the hotel.

Owner Steve Appleby’s son Todd said the family would try to save as much of the facade as possible to use as “a bit of a memento” in the new pub.

“Because the fire was deliberately lit and there is an ongoing investigation, it’s going to be a process but dad is really hopeful that we can rebuild,” Mr Appleby said.

“She will be coming down but we will lay her down with respect sometime over the next few days.”

Mrs Simons said it was her father’s long-held dream to restore the pub when he retired.

Jock and his son Steve spent $130,000 and two years refurbishing the rundown hotel to its elegance of 100 years ago, she said.

“It was in an awful state. It was jerry-built with add-ons before dad and Steve added two bars and outdoor area but kept it in the old style,” Mrs Simons said.

Bar trade went from two barrels to 12 and Campania Tavern became one of the most popular hotels east of the River Derwent, she said.