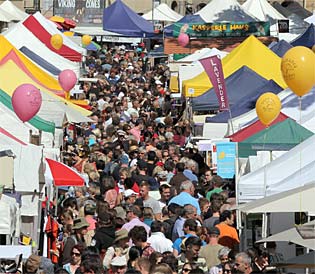 SALAMANCA Market stallholders have threatened to take legal action against the Hobart City Council over an “onerous” new licence agreement that would dictate which goods can be sold.

Aldermen will vote on the wording of the licence, which has been more than three years in the making, at tonight’s council meeting.

Salamanca Market Stallholders Association president Kerry Rourke would not comment ahead of tonight’s decision, but has written to the council saying the association “reserved the right” to take legal action, injunctive proceedings or class actions if its views were not heeded.

The association wants the existing licence amended rather than the proposed new agreement, which includes an “Optimal Product Line Mix” to dictate which new items are approved for sale.

At a council committee meeting last week, stallholder Helen Timms told aldermen the lengthy process had been a waste of money that would have been better spent on improving infrastructure for the market, such as additional public toilets.

But an EMRS poll in 2007 found the market’s image was suffering from a “growing proportion of cheap and poor-quality imported product”.

A Saturday Farm Gate Market, also dedicated to local produce, will start at Bellerive next month.