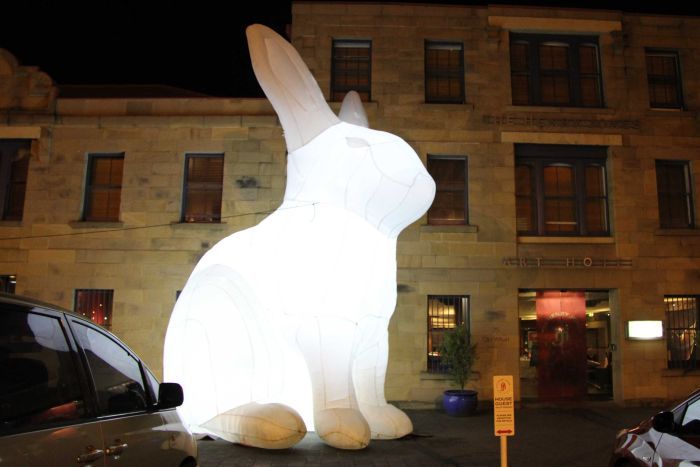 Tasmania’s Dark MOFO festival, a great event in its own right, is reaping extra benefits of Vivid Sydney’s popularity as exhibits such as the giant illuminated rabbits (pictured) have extra avenues for exposure to large audiences. Whilst lighting festivals promote Australia amongst international design and art populations, the festivals also give rise to Australian artists, such as Amanda Parer, creator of the pictured rabbit exhibition entitled ‘Intrude’.

The festival celebrating Tasmania’s winter has begun with a large-scale light show over Hobart.

The Museum of New and Old Art’s festival, Dark Mofo, will run until June 22, with a program that includes a winter feast, nude solstice swim, films and performances.

Locals and tourists flocked to Hobart’s waterfront last night for a chance to control the levers behind a large-scale searchlight installation.

Articulated Intersect is visible over a 15-kilometre radius throughout the festival.

The Mexican-Canadian artist behind the light show, Rafael Lozano-Hemmer, said it was a complex engineering job.

“There are six levers in total, each controlling three lights. The lights are 8,000 watts each,” he said.

The festival’s creative director, Leigh Carmichael, said the highlight of Dark Mofo will be the winter feast.

“We’re running the feast again because we think that’s integral to the festival. It’s really about coming together as a community,” he said.

“Celebrating our winter, our food and wine culture, our art culture, that’s what it’s all about, so we think the feast is actually the most important part of the festival.”

Meanwhile, the festival is again calling for participants for its nude solstice swim.

Festival-goers can celebrate winter solstice by skinny dipping at 7:42am on Sunday June 22 at Sandy Bay Beach, organisers say.

The chill extends to an ice wall being built on the banks of the Derwent River; people are invited to “wash” the ice with mops, in Chinese artist Yin Xiuzhen’s symbolic gesture against river pollution.