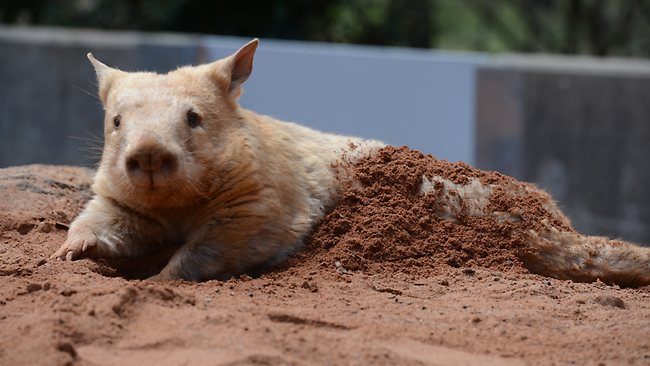 DOZENS of southern hairy nosed wombats have suffered “ghastly” deaths and many others are starving in the Mallee region, the Conservation Volunteers group has warned.

Post-mortem examinations on about 20 wombats found in the area surrounding Brookfield Conservation Park, 130km from Adelaide, showed that they had been very sick.

The region is one of only three areas where the state’s faunal emblem is found.

University of Adelaide veterinary pathologist Dr Lucy Woolford, who conducted the examinations, said all the animals were extremely skinny, losing their hair and some had liver disease.

She said all the symptoms pointed to a lack of food source. Conservation Volunteers regional program manager Tricia Curtis said they were very concerned about the species’ life-threatening health issues. “We are seeing wombats that have died – we find them dead because they are malnourished because they haven’t had enough to eat,” she said.

“Their preferred food source (native grass) has been diminished and in some areas is non-existent.”

“It’s a ghastly death for them – they are dying very slowly because they come out at night and there is nothing for them to eat.”

But Ms Curtis said she couldn’t point the finger at any one person for the dire state of the wombats. “There are many people that use the land – farmers and different land managers,” she said.

“People who have bush blocks haven’t managed their blocks either, in terms of managing weeds.”

The organisation, which took over the management of the Brookfield Conservation Park a few years ago, is slowly revegetating the 550,000ha piece of land in the hope of saving the wombats.

“Farmers can be assisting by revegetating areas that they don’t crop,” Ms Curtis said. Volunteers are now trying to establish how many of the nocturnal animals are left in the region.

But in better news for the species, Cleland Wildlife Park has welcomed a pair of rare golden hairy-nosed wombats. Three-year-old Icy and Polar have just gone on public display after being raised in a rescue centre in Ceduna since 2011.

And while the animals are still young, Cleland Wildlife Park manager Nalini Klopp hopes that the pair may one day be suitable for breeding.