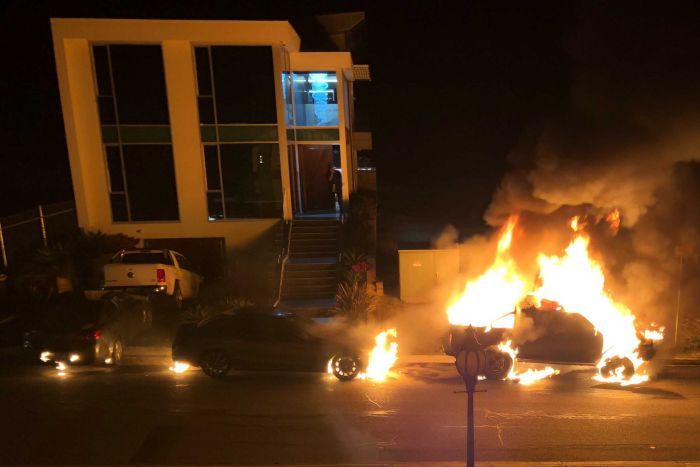 This house was not only on the SA Gov’s tourism website, it was individually promoted on Twitter.

South Australia’s Opposition has called for a better vetting process after it was revealed a notorious party house is being advertised on a State Government tourism website.

The luxury beachside mansion at Moana, south of Adelaide, has been the subject of repeated complaints from local residents, with claims of raucous parties and bad behaviour from guests renting the property on a short-term basis.

Cars were set alight outside the property, known as “Luxe Haus”, last year following 48 hours of partying by guests.

In an unrelated matter, the property also recently played host to a music video.

The ABC understands the property is owned by a convicted sex offender.

Opposition tourism spokesman Zoe Bettison questioned why the house was still advertised on the South Australian Government’s tourism website southaustralia.com when accommodation website Airbnb had taken down its listing for the house.

“What is the vetting process before these properties are advertised?” Ms Bettison said.

“What is this doing to our brand if we’re advertising, with taxpayer funds, a party house?” 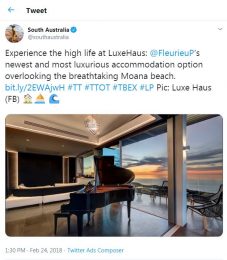 Ms Bettison said Labor had fielded calls from neighbours who were concerned about ongoing activities at the house.

“Not only have neighbours reached out to the Opposition to complain about noise and inappropriate behaviour, last year we saw cars on fire in the street,” she said.

“This is an accommodation property that’s impacting on the neighbours, but more importantly on the reputation of southaustralia.com.”

SA Premier Steven Marshall said he was concerned about the issue, and had asked the South Australian Tourism Commission (SATC) to respond.

“I share concerns. I’m not sure this property should have ever been available for rent,” Mr Marshall said.

However, in a statement, SATC’s executive director of marketing Brent Hill said Luxe Haus was not in breach of any Australian Tourism Data Warehouse (ATDW) policies.

The ATDW national database is where southaustralia.com sources its content.

“The listing of ‘Luxe Haus’ is available on Booking.com, Expedia, Wotif and other national and international booking platforms,” Mr Hill said.

“Following recent discussions with the new management and assurances that they had put in place policies and procedures to deal with large groups, the SATC is comfortable with them being listed.”

‘No sexual activity’ in music video

The house was the setting of a music video shoot for Adelaide-based artist Sadziah in May, raising concerns from some locals that an adult film was being made.

Sydney music producer Nenous Toma acknowledged it was sexually suggestive, including provocative outfits worn by male models and exotic dancers, but rejected claims it was explicit.

“It wasn’t a pornographic video, it was actually a music video for a hip-hop artist,” Mr Toma said.

“There was no sexual activity whatsoever.

“Inside the house, there were girls who were in the nude but that’s discreet.

“No-one can see inside the house anyway.”

Mr Toma said he had received no formal complaints from neighbours.

“I had a few neighbours come up to me and they asked what was going on and I told them,” he said.

“I do understand where they’re coming from as there were girls in lingerie, et cetera.

“[But] if you look at all the music videos that are going out now, it’s not like something new. It’s been done plenty of times.”

Cars set on fire outside property

Last year, police confirmed they were investigating after a car was set on fire at the property in a separate incident.

At the time a neighbour — who wished to remain anonymous — told the ABC the house was regularly used to host parties and was a disruption for locals.

“If this happened in the Hyatt or the Hilton, you’d get chucked out,” he said.

“There was a naked man standing on the roof of the ute before it got burned.

“I’m sick of having naked women visible on the balcony when you’re trying to take your kids for a walk on a weekend.”

The property — which boasts seven bathrooms, three kitchens and beachfront views — is listed on several accommodation sites with prices starting from $2,000 per night.

A property title search shows the property is owned by convicted sex offender Corey John Ahlburg, with a certificate of title naming Ahlburg and a business named JANBAR Pty Ltd as the owners.

It said he received a head sentence of three years with a non-parole period of 12 months.

A representative for Luxe Haus told the ABC that Ahlburg was not the owner, but would not clarify his current involvement with the property.