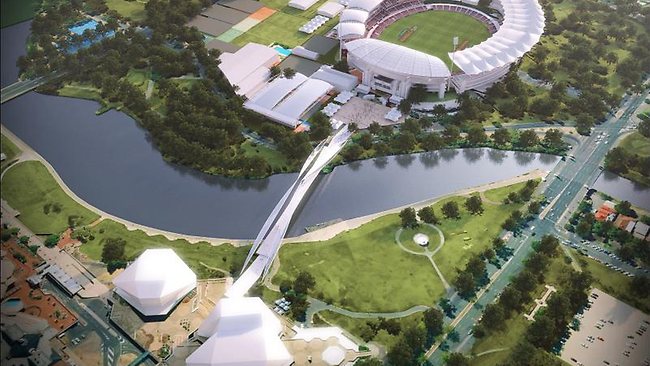 Don’t even think about it. The River Torrens footbridge to the Adelaide Oval won’t be rocking if the city council gets its way under its plan to play soothing music to calm rowdy sports fans.

The council has asked the State Government to include an audio system in designs for the $40 million bridge, as well as CCTV, lighting, the use of graffiti-resistant materials and public art.

A council spokeswoman said the main role of a sound system would be to direct fans in an emergency but it would also allow soft music to be used as an “aggression controller”.

The council and the Government released statements this week that said they were working together “to achieve the best possible outcome in providing an outstanding pedestrian bridge for the public to use all year round”.

A spokesman for Transport and Infrastructure Minister Tom Koutsantonis said the Government had held talks with council officers about security measures.

“We will continue to work together to incorporate these elements into the bridge project,” he said.

The spokesman did not address questions about who should pay for the extra elements or whether they would fit within the budget for the bridge.

The council wants the Government to gift it the bridge once it’s finished. In return, the council would pay for ongoing upkeep.

Public consultation runs until March 20, after which a final design will be assessed by the Development Assessment Commission.

Planning Minister John Rau, who has committed to having the bridge built before the Ashes Test in December, will have the final say on its approval.