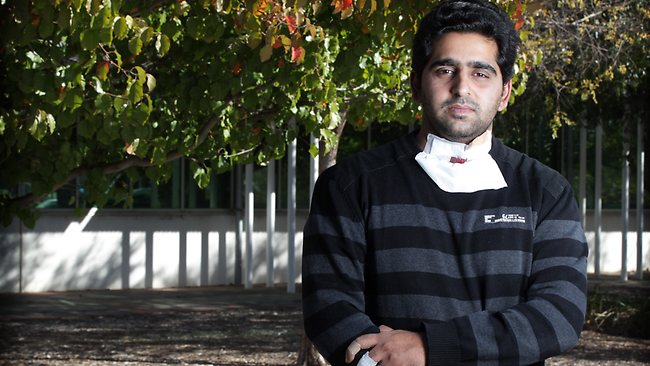 TAXI drivers are so fearful of passenger attacks many are frightened to venture on to Adelaide streets, an assault victim says.

Suleman Khalid, 28, says drivers are reluctant to collect passengers at night after he was allegedly attacked by two men armed with knives outside his Ashford home on Friday night.

Police have arrested two Keswick men, aged 20 and 19, and charged both with aggravated robbery and aggravated cause harm.

The 20-year-old was also charged with driving without a licence and was refused bail to appear in the Adelaide Magistrates’ Court today. The 19-year-old was bailed to appear next month.

Mr Khalid, who suffered serious cuts to his throat after requesting pre-payment of a fare, said he was still considering whether to return to taxi driving.

“I’m scared now … I’m going away to Pakistan to see my dad and I’ll have to think whether or not I can come back and still be a taxi driver,” he said.

He said mandatory shields should be introduced to protect drivers because that was the only measure that provided physical protection. Currently, shields are optional.

“Cameras don’t protect you. What is a camera going to do?”

Mr Khalid said he was relieved two people had been arrested.

Premier Jay Weatherill said taxi drivers needed to feel safe and that everybody was entitled to go to work without fear of being attacked.

“I share their concerns,” he said. “I think they are completely legitimate concerns and they are entitled to feel very angry at the way in which one of their mates was treated just going about their ordinary business.

“If you can’t drive feeling safe because you are worried about some idiot attacking you in that fashion, then we have to respond to that.”

Taxi Council SA president Jim Triantafyllou said it would have to consider the pros and cons of making protective shields mandatory.

“By making shields compulsory if there is a motor vehicle accident and the driver is trapped, then who is liable?”

Four men have been charged over the armed robbery of a Gold Coast taxi driver.

Police say one of them sprayed a fire extinguisher at the 67-year-old man at Biggera Waters last night.

He has been treated in the Gold Coast hospital for irritation to his eyes and face.

The group allegedly stole his iPad and cash tin and then damaged another car and shop window.

A 17-year-old was charged with robbery whilst armed in company, possession of a dangerous drug and with stating a false name.

An 18-year-old from Elliott Heads was charged with robbery whilst armed in company and wilful damage.

Both are scheduled to appear in the Southport Magistrates Court today.

Another two teenagers were charged with stealing and possessing a dangerous drug. and are due in court next month.

Police say the 18-year-old was involved in a fight with a 16-year-old boy at a nearby shopping centre a short time later.

The man was taken to hospital with a serious laceration to his neck.