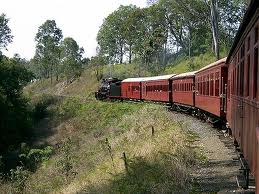 The Gympie Cooloola Tourism Board says losing the Mary Valley ‘Rattler’ steam train in south-east Queensland would be a major blow to the community.

Queensland’s Rail Safety Regulator yesterday handed down a report finding that the Rattler needs major maintenance upgrades, including 6,000 new sleepers, before it can operate again.

The report says the heritage railway must be suspended until major upgrades are completed.

The train’s second derailment this year led to services being stopped more than four weeks ago.

Tourism board chairman Glen Alfredson says the historic train is a significant part of the region’s history.

“Being our major tourist or iconic tourist attraction in the area it’s going to have a huge impact on tourism here,” he said.

“Imbil is very dependent on the amount of traffic being brought in by the Rattler.”

Mr Alfredson says the steam train brings $2 million a year to the region.

“Obviously if you take $2 million out of the inflow it really does [have an impact],” Mr Alfredson said.

“I don’t think the average person in Gympie realises how much it contributes to the local economy.”

An advisory group will be set up to implement the recommendations of the rail safety report.

Gympie MP David Gibson says shortening the route is one option that will be considered.

“The preliminary estimate with regard to the improvement of both the track and the rolling stock is somewhere between $1 million to $2 million,” he said.

“It is clear that is beyond the current capacity of the MVHR [Mary Valley Heritage Railway] to maintain.

“Some difficult decisions need to be made as to how far they can travel and which Mary Valley communities may miss out.”