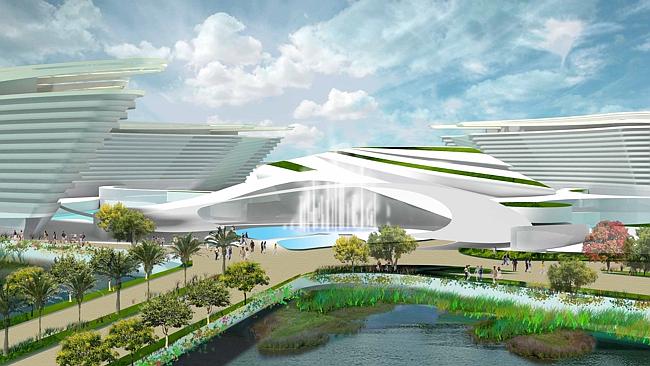 See below – the Aquis development at Yorkeys Knob is taken as fact in Cairns, yet media, council and state government are still feigning an application process.

AQUIS – BUT NOT AS YOU KNOW IT

Aquis at the Great Barrier Reef Resort is one of six projects registered as expressions of interest when submissions closed on Monday.

Deputy Premier and State Development, Infrastructure and Planning Minister Jeff Seeney said it was pleasing to see both national and international consortia registering expressions of interest.

But he warned that not all would be granted a licence.

“This is the next crucial stage in the Queensland Government’s plan to create world-class resorts that will revitalise the tourism and construction sectors of the economy,’’ Mr Seeney said.

“It’s important to understand that the Government is seeking truly world-class proposals that meet the state’s objectives and requirements for Integrated Resort Developments.

AQUIS AMONG 7 BIDDERS FOR RESORT DEVELOPMENT

“Despite their enthusiasm, not all of the proponents listed today will receive a licence.”

Mr Seeney said the list of development consortia released yesterday would be further refined this year when the process entered the Request for Detailed Proposals stage.

“Under the close eye of Probity Adviser Len Scanlan, my department will now consider the EOI applicants to prepare a final short-list by the middle of this year,” he said.

“That is when we will ask short-listed applicants to begin preparing fully-fledged proposals for submission by late 2014.

“The final stage of contract negotiations is expected to run into early next year. A decision on who will receive lic­ences is expected by mid-2015. I look forward to viewing fully-fledged proposals from some of these groups by the end of this year.’’

AQUIS CHIPS ARE UP

A BET BOTH WAYS

Aquis chief executive Justin Fung said his company supported the government and its process to manage the future development of Queensland’s tourism industry.

“We believe our proposal provides an outstanding opportunity to develop a world class integrated resort and provide much-needed stimulus to the Cairns and north Queensland economies,’’ he said.

Aquis is taking over the Reef Hotel Casino in Cairns in a $269 million bid with negotiations under way to use its licence to also cover the Northern Beaches site.