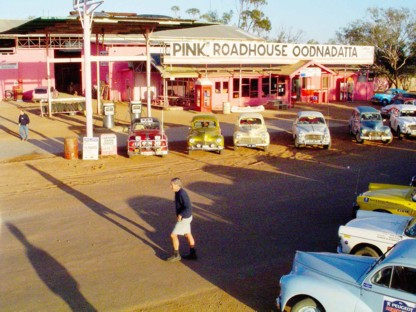 From The Coober Pedy Regional Times

The many pastoral families and remote town’s folk who have known Adam since he arrived at Oodnadatta in 1974 with his then girlfriend Lynnie Trevillian, are still coming to grips with the loss of their outback icon.

When news of the shocking accident reached the Far North on Friday, Mayor Steve Baines of Coober Pedy turned his thoughts immediately to the Plate family.

“On behalf of the residents of Coober Pedy I extend my condolences to Lynnie and the family. Our thoughts are with you all at this very sad time.”

“Adam was a true outback legend who stood up for what he believed in and Outback South Australia is a better place because of him”, said Mayor Baines.

Adam Plate died tragically when the Mitsubishi Evo VII he was driving in the Targa Adelaide Championship Rally in southern Adelaide hit a tree and rolled down an embankment.

An eye witness said he saw Mr. Plate’s Mitsubishi slide around a sweeping left-hand bend at about 100 km/h and go into a slide, clipping a tree. The car then, flew through the air and rolled three times before landing in a paddock.

On Friday 30th August Patrick Chan said, “We actually hit two trees, a large gum tree and then a smaller tree, then we spun down the hill about 70 metres.  We didn’t roll”. 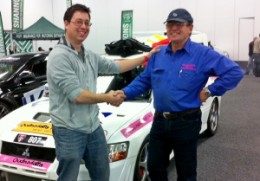 The crash happened on Main Road at Chandlers Hill during the Clarendon stage of the rally in the Adelaide hills.  It is believed that the wet road conditions were caused by rain.

The injured navigator Patrick Chan walked from the vehicle and was taken by ambulance to the Flinders Medical Centre after the accident which occurred just after 1pm (ACST).

Adam Plate and Patrick Chan  were entered in the SUPALOC Early Modern event and were tipped to come in third by fellow rally enthusiasts.

On Tuesday 21 August Adam sent an enthusiastic picture to the Coober Pedy Regional Times from his iphone. Adam and Patrick had been busy preparing for the event.

Left: Adam Plate of the Pink Roadhouse and Pat Chan of Adelaide at scrutineering on Tuesday, preparing their 2001 Mitsubishi EVO7 for 4 days of hectic competition rally driving on closed public roads in the Adelaide Hills. The cars stickers promote the Oodnadatta Track area and SA Outback.

Rally organisers and the Confederation of Australian Motor Sport have issued a statement, saying they are deeply saddened about the death and working with authorities as they investigate the circumstances.

In 2009 Adam and his close friend Trevor Wright of Wrightsair Air Charter at William Ck (navigator) entered Adam’s 1983 Porsche Targa into the 2009 Classic Adelaide Tarmac Rally to promote the Outback and for 4 days of hard driving through the Adelaide Hills. The class they entered was “Thorougbred Touring”.

Since their arrival at Oodnadatta 38 years ago, Adam and his wife Lynnie have revolutionized the way travelers are able to access the remotest of areas in the far north, fighting long and hard for better road conditions.

Travelers, 4wd explorers and locals have considered Adam to be synonymous with the outback. From his home and base at the the Pink Roadhouse in Oodnadatta, Adam has rendered the outback safe and made it possible for 4wd’s to travel into the Simpson Desert.

With his wife Lynnie by his side, Adam provided a vital rescue and repair service, remote signage, mud maps, information as well as a warm fire or a swimming pool in times of flood, fire or extreme heat. Travellers found a home away from home there. 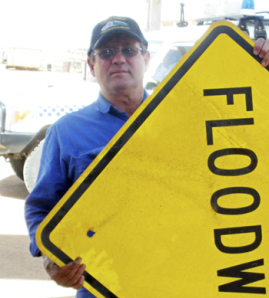 The Oodnadatta Track was named by Adam Plate around 1980 to become consistent with the Birdsville and Strzelecki Tracks which link together forming a fascinating tourist route.

The Pink Roadhouse is the travellers oasis in the desert, despite the remote areas folk still experience close to third world conditions.  Adam has been the driving force behind all progress brought about in the outback during the last 38 years. Next to his family, the outback was the love of his life.

Adam leaves behind his wife Lynnie and three daughters, Alice, Tilly and Ruby.  The far north communities will feel this loss for years to come.