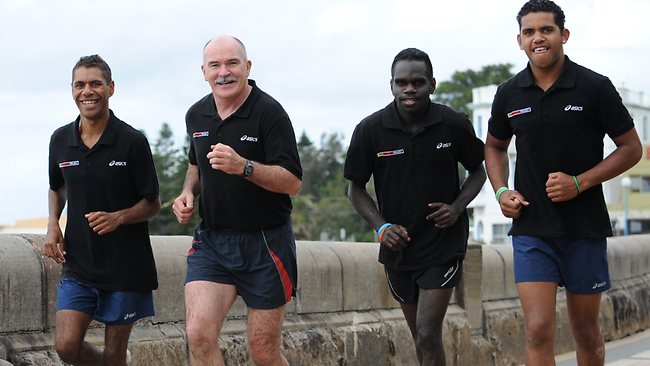 Former Boston Marathon winner Robert de Castella has urged event organisers not to scale back major international running events in the wake of the Boston blasts.

The FBI has launched a potential terrorist investigation after at least three people died and more than a hundred were injured from twin explosions near the finish line of the Boston marathon.

Australian marathon legend De Castella was near the finish line at the event waiting for Emma Cameron, an Indigenous Australian runner who he coaches, to complete the race.

Cameron and several other Australian runners escaped harm from the blasts.

De Castella, who won the Boston men’s elite race in 1986, says he is disturbed by the blasts at an event that is designed to bring people together.

“This is a marathon’s Mecca, runners from all over the world make a pilgrimage to this run because it is the oldest running marathon in the world,” De Castella told ABC News Breakfast.

“There are 27,000 people from every corner of the world. Every religion, every colour, every group is here.”

Organisers of the London Marathon, to be held on Sunday, announced security arrangements will be reviewed but the race will go on.

“If it is an act of terrorism, then obviously these things are designed to disrupt people’s participation in events like this and I think that is exactly what they are trying to achieve,” de Castella said.

“I am of the view that the last thing we should do is kowtow to this sort of coward action and continue to do what we always have done. We need more of these sorts of things, not less.”

“We can’t let these sorts of acts stop sporting events around the world,” O’Brien said.

O’Brien said security had been tight at all major running events in recent years and will be stepped up even further now.

‘All sporting events are very much aware of being on full alert and this will heighten again,” he said.

“I know that our own mass participation event, the Sydney running festival ever been in contact with the NSW police and I know they are taking steps already to make sure all our security measures are in place.”

About 150 Australian athletes are believed to have competed at Boston.