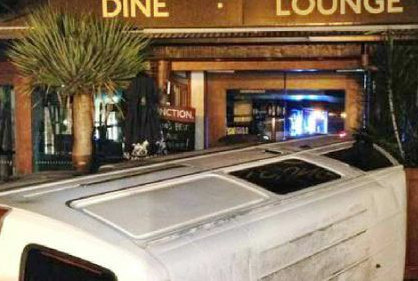 A DRUNK Swedish driver brought new meaning to the idea of a “drive-through” restaurant when she rolled and crashed her campervan into a Byron Bay eatery on Sunday morning.

Shortly after 2am, the 21-year-old tourist tried to make a right turn into Fletcher St, but failed, rolling the van onto its side and ending up in The Junction Restaurant’s deck area.

Police conducted a breath test on the woman at the scene where she returned a positive reading.

She was taken to Byron Bay Police Station, where she blew 0.181.

“A young female at that high range would be quite affected and wouldn’t know what’s going on,” Acting Inspector Jason Dowds said.

“The corner of the decking has been shunted up into the window and it looks like there’s a couple of bullet holes in the glass,” he said.

“Surprisingly, the glass has held. Our insurance company will be chasing her.”

The Swede will not be covered by insurance as she was intoxicated during the incident.

“This will be a holiday for her to remember,” Mr Edgson said.

He said it was lucky no one was injured by the “tepee on wheels”.

“We figure she was travelling at a rate of knots because there’s chips taken out of the gutter where she hit it,” he said.

“Ultimately, the luck of the Irish was on our side as the venue was closed, so no one was injured, thankfully.”

The business took the mishap in its stride yesterday, with Mr Edgson joking that he had not considered a drive-through restaurant before. “We’ve tried to dress the restaurant up for today’s trade,” he said.

“We’ve had to move some plants around but some people have actually said, ‘Wow, I like how you’ve got the plants now’.”

The woman was charged with high-range drink driving. 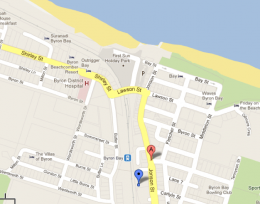