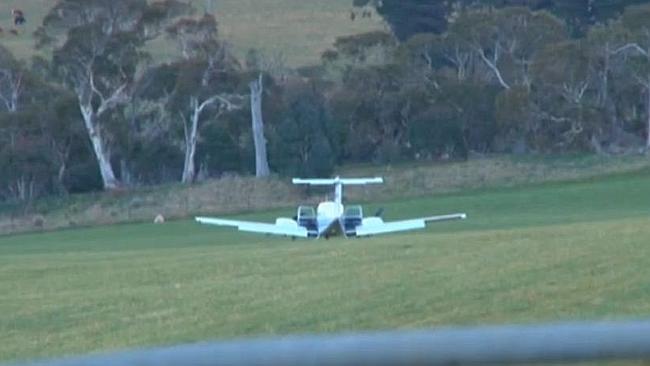 TTN: Below is the raw information from the incident; it was later uncovered that the man who risked crashing the plane was well-known around NSW as an upstanding citizen. The guilty man was taken to hospital and later charged – says he doesn’t remember the incident at all.

An elderly passenger in a light plane tried to grab the aircraft’s controls before the pilot was forced to make an emergency landing in a paddock in central western NSW, the pilot has told police.

The 23-year-old pilot had to restrain his 82-year-old passenger before landing the Beechcraft Duchess aircraft in a paddock off Titania Road in Oberon just before 3pm on Monday.

Acting Inspector Gareth Smith said the elderly man had booked the flight from Bankstown to Cowra for a business trip, but mid way through the flight started acting erratically.

“The pilot said that he started grabbing the controls, turning off fuel lines, and turning buttons randomly on and off,” Acting Inspector Gareth Smith said.

The pilot reportedly made a “pan-pan” distress call and had to restrain the passenger shortly before making an emergency landing.

“A pan call means the pilot is in trouble and needs help, but is not in a life-threatening situation,” an aviation expert told Fairfax Media.

No one was seriously injured during the landing. However, the 82-year-old man was taken to Westmead Hospital with head and facial injuries.

Acting Inspector Smith said police were yet to interview the elderly man about what had occurred. He said it was unclear whether the man was suffering from a medical condition, resulting in his behaviour.

“He was taken away in a helicopter prior to police arriving and we still need to talk to him,” Acting Inspector Smith said.

The 23-year-old pilot was an employee of Sydney-based company Australia by Air, and the men did not know each other before the charter flight.

Australia by Air confirmed one of its planes had been involved in an incident.

“The pilot conducted a successful forced landing near Oberon,” the company said in a statement.

“The pilot displayed excellent airmanship and skill during the landing, and we thank him for his professionalism.

“We would also like to thank the emergency services for their swift response.”

The pilot was briefly admitted to hospital for a leg injury, and then discharged, the company said. Police said the pilot was also treated for shock.

The aircraft sustained minor damage during the landing.

Police are continuing to investigate the incident.