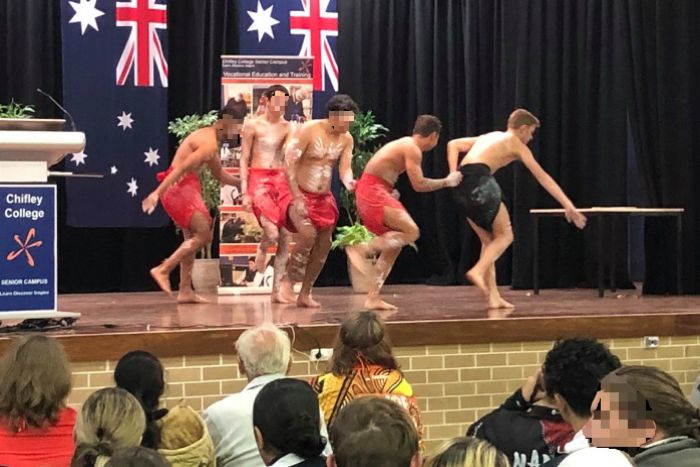 The NSW Government is investigating after Indigenous students claim they were laughed off stage at their western Sydney school while giving a NAIDOC dance performance.

The Gadi Boorong group were halfway through their showcase in front of the entire school when they claim the music stopped and they were ushered off the stage.

Students said the crowd laughed at them, claim they heard racist remarks and were given various excuses as to why their performance was shut down.

Parent Jennifer Murray said her daughter had been performing and called her after the event.

“She was so emotional, and it was so disheartening to see her come home so distressed,” Ms Murray said.

“It was so inappropriate to stop the performance, especially during NAIDOC week … we love getting out there and sharing our culture but now a lot of the students never want to dance again now.”

NAIDOC Week runs from July 7 to 14 and celebrates the history, culture and achievements of Aboriginal and Torres Strait Islander peoples.

The Department of Education told the ABC the performance was interrupted due to an unintentional “technical glitch”.

“Department staff at the event did not witness the allegations you have made in your enquiry,” a spokesperson said.

“However, the school and the department do not tolerate racism.”

“Chifley College Senior Campus prides itself on being a diverse and harmonious school. Any allegation of racism will be looked into.”

One student involved in the dance took to Facebook to vent their frustration.

“Have students call out to my friends & call them ‘Abo’ because they were picking leaves off a tree for a traditional dance,” they posted.

“Have the crowd laugh in our faces … made us look so unprofessional.”

The ABC has been told tensions over the dance were so high, a meeting was held between parents, the NSW Department of Education and the Anti-Discrimination Board NSW on Friday.

“The kids know what happened, they were there,” Ms Ufi said.

“At the end of the day, they deserve to be heard.”

On Wednesday, a school student told the ABC a fellow student interrupted the dancers at the direction of a teacher who said the performance was over.

“[They] walked out of the hall angry and upset at the teachers and us which was understandable because we accidentally interrupted them … after the assembly I apologised to all of them,” she said.