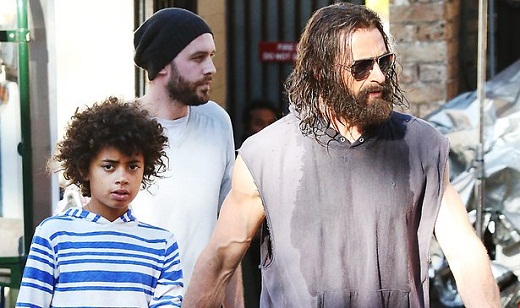 Australian actor, Hugh Jackman, is currently busy filming some scenes for his latest movie “The Wolverine” on the streets of Parramatta in Greater Western Sydney.

Once more, Hugh Jackman reprises his role as the famous “X-Men” character Wolverine while a Japanese actress named Tao Okamoto portrays the character Mariko Yashida. Bystanders have described the scene that Jackman and Okamoto were filming looked like a heart-stopping rescue scene.

According to News.com, the scene being filmed involves Hugh Jackman and Tao Okamoto chased by a gunman where Jackman has to carry the Japanese actress in his arms while running through the streets of George and Smith. Okamoto was safely attached to a harness which made it easier for Jackman to carry her most of the time since numerous takes were required for that particular scene.

Meanwhile, Parramatta has been temporarily transformed into the city of Tokyo for the set of the upcoming movie “The Wolverine” with the use of Japanese props such as street signs, car plates and logos on the buildings. Lord Mayor John Chedid claimed that Parramatta is proud to be a part of a blockbuster film. ”I’m excited and proud Parramatta has been chosen as a stage for The Wolverine. It reflects the city’s quickly growing appeal as a leading filming destination, and having this high profile movie filmed here will only enhance this further,” Mayor Chedid said.

One of the world’s leading city strategists, Ethan Kent, believes that Parramatta has some of the interesting areas which became the reason why the town was chosen as a filming location for the blockbuster movie “The Wolverine.”

“Parramatta is so exciting because it has a number of diverse elements, from its foreshore through to its parklands, heritage sites and small spaces. All these areas provide the City with an opportunity to create its own unique identity,” Kent said.

The exciting scenes of “The Wolverine” filmed in Parramatta will be seen on cinemas with the scheduled release of the movie in 2013.