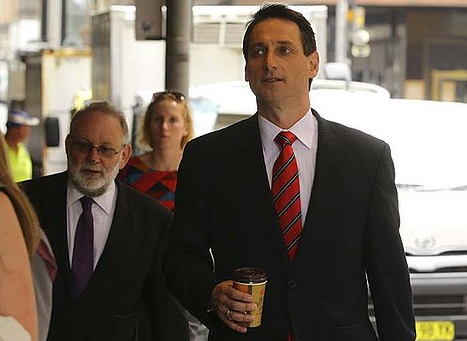 Eric Roozendaal, a member of the NSW Legislative Council and former Treasurer of NSW has said he doesn’t consider a ‘saving’ a ‘financial benefit’.

Roozendaal now suggests the form was filled out incorrectly by the car dealer, but at the time signed it anyway.

Roozendaal said in his Independent Commission Against Corruption enquiry (6/11/12) “I don’t see why I have to be responsible when clearly [the car dealer] has failed to complete the form properly.”

Roozendaal is apparently a rev-head, which explains the existence of a V8 Supercar motoring event at Sydney Olympic Park despite protests from community groups, planning groups, and just about everyone else in NSW.

Roozendaal’s fun little penchant for cars and flippancy toward signing stuff also explains the establishment of the Homebush Motor Racing Authority (HRMA). The HRMA have not so much as put out a newsletter since October 2010.

From the Sydney Morning Herald:

Eric Roozendaal has revealed he submitted false information to the Roads and Traffic Authority when he was roads minister regarding the Honda CRV at the centre of a corruption probe.

The Upper House member told the Independent Commission Against Corruption on Tuesday that he did not closely examine the “Form 4” RTA document he submitted, which contained numerous false entries.

A “Form 4” document records the sale of vehicles.

“I don’t see why I have to be responsible when clearly [the car dealer] has failed to complete the form properly,” he told the inquiry.

He also blamed his “slackness” for allowing his wife to drive around Sydney in a car that was registered in another person’s name.

“It was my slackness in not transferring the registration – and if you look at any of my personal affairs, I was pretty committed to the work I did and pretty hopeless with my personal finances,” Mr Roozendaal said.

The former NSW treasurer denied that he received a benefit in the form of a $10,000 discount on the Honda.

The inquiry has heard that Mr Roozendaal insured the car for $43,000, although he had only paid $34,000. The difference between the figures was paid for by the family of former Labor powerbroker Eddie Obeid.

It was not a financial benefit, said Mr Roozendaal. “It’s a saving.”

Mr Roozendaal told the inquiry he had received a discount because his car was second-hand at the time he took it from an inner city car dealer on June 19, 2007.

The Commission has heard that Mr Roozendaal had signed no contract and had not paid for the car at the time he took possession of it. Instead, the car was in the name of the sister of Moses Obeid’s business partner, who has told the inquiry she has never seen the Honda, despite being the registered owner for a short while.

Geoffrey Watson, counsel assisting the inquiry, has previously described the transaction involving the sale of the Honda as a “sham”.