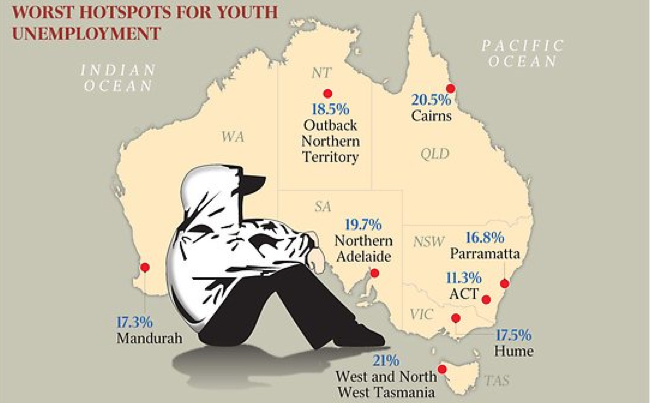 Appendix: From the original data from social advocacy organisation The Brotherhood of St Laurence. See below table for full story from The Australian. 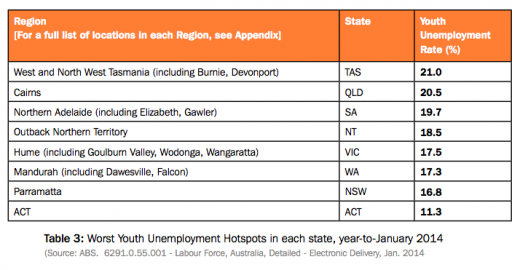 THE proportion of young people without jobs in some parts of Australia is “verging on the trainwreck economies of Europe” and has been scandalously ignored, the head of a national welfare charity says.

Brotherhood of St Laurence executive director Tony Nicholson will release a new analysis of youth unemployment data today which shows the rate has been climbing disproportionately since the global financial crisis began and, at 12.4 per cent, is now more than double that of the entire workforce. The analysis also reveals parts of the nation where the rate is dramatically higher.

One in five young people aged 15 to 24 in west and northwest Tasmania, in Cairns and northern Adelaide are without a job.

“Youth unemployment as high as 21 per cent in some areas of our country is a scandal for our young people, our communities and our economy,” Mr Nicholson said.

“That’s verging on the trainwreck economies of Europe but it’s happening here in a country which has endured relatively less economic turmoil than those countries in the eurozone.

“The plight of our young unemployed in Australia needs to be put in the spotlight because we are at serious risk of letting a generation fall on to the margins of society.”

The youth unemployment rate in the eurozone is about 24.2 per cent, but hit 57.7 per cent in Spain at the end of last year.

Mr Nicholson said a comprehensive program that helped students transition from school and into the workforce was required and that the only national program that currently did that job expired at the end of this year.

“That program, the $80 million Youth Connections, runs out in December and we have nothing on the table to replace it,” he said.

Mr Nicholson said he had seen programs overseen by the Brotherhood of St Laurence make remarkable progress in helping young people into work.

“These figures aren’t high because young people suddenly don’t want to work; it’s because they are blocked and shut out.”