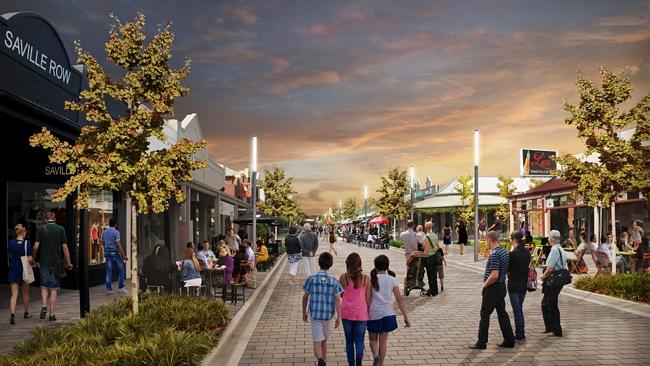 From the Adelaide Advertiser, 4th August 2014

The council’s long-term vision for King William Rd, released last week, is aimed at attracting younger people to the precinct for a social experience.

The report says the full rejuvenation might cost up to $18 million.

But the council is yet to commit to the funding and is unable to say if and when major works will go ahead.

In the report, consultant Hassell — which designed the new Rundle Mall and Adelaide Zoo — found the 600m strip, between Arthur and Parker streets, had limited space for outdoor dining, poor lighting and a noisy road surface.

A full upgrade of the strip — including road resurfacing, new footpaths, blocking intersections to create more open space and using on-street carparks for outdoor dining or gardens — could cost up to $18 million, according to the report.

It said off-street parking — often behind shops — was not being used and could be redesigned to attract more people and mitigate the loss of on-street parks.

It also found King William Rd mostly attracted people who wanted to park, make a purchase and leave, rather than a social place where people stayed to enjoy the area.

“Young adults of Adelaide are transitional and constantly on the look out for something new,” the report, which cost Unley Council $60,000, stated.

“The 20 to 40 year olds are not concerned about whether they can find a park out the front of their favourite store.

“They are looking for an atmosphere and vibrancy in a place the encompasses the finer part of life — the ability to be seen doing the things they love to do.”

The report said the strip would benefit from street events similar to the Unley Gourmet Gala on King William Rd as part of the annual Tour Down Under and the Waymouth Street Party and Garden of Unearthly Delights, part of Adelaide Fringe Festival.

“The creation of some extra places for people to sit, relax and enjoy all that the road has to offer will certainly further enhance the King William Road experience,” Mr Karran said.

“The future of shopping, especially with competition from online, will all be about the experience,” Cr Palmer said.

“People are not going to come to a shop unless they have an experience to go with it.”

“Our generation (Baby Boomers) still believe in cars — this is about evolution,” Cr Hewitson told the meeting.

He said the increasing popularity of cycling and walking needed to be considered in any future planning.

The council has included $85,000 in its 2014/15 budget to turn two on-street carparks into outdoor dining or small gardens in a 12-months trial.

Unley chief executive Peter Tsokas said the parklet trial was the first step in the revitalisation of the strip.

The council would look at including funds for other aspects of the project in its long-term financial plan.