‘Yelp’ praise comes with a sting in the tail 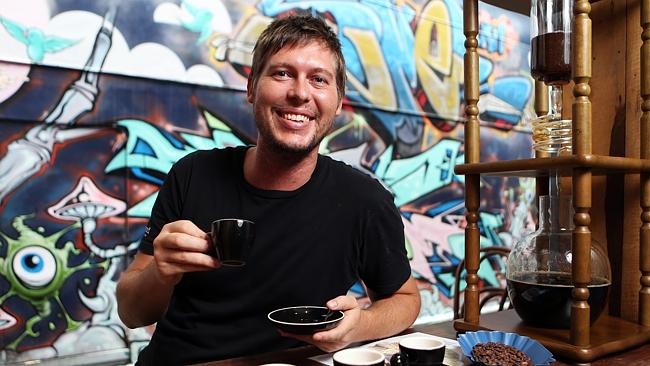 Olly had better watch out though – Yelp’s aggressive marketing is infamous, and US operators have reported Yelp turning on business owners when owners don’t want to buy expensive advertising packages.

The below three stories demonstrate a typical progression of a Tourism News aggregated story.

1. A Cairns operator is featured in the Cairns Post for being named one of Yelp.com’s Top 100 Australian cafes. Good for him, we thought.

2. A quick survey around The Tourism News office revealed that no-one here is really using Yelp. Our immediate friends and family aren’t into it either.

3. Researching Yelp’s origins, we find that they have been accused of extorting customers since 2010. The racket, apparently, is to have a business become hooked on the increased trade it garners from Yelp, a Yelp ad sales executive calls and pitches expensive advertising packages (one quote was +$8000 p/a) and if you refuse, negative reviews are higher up on your Yelp profile and the positive ones float down out of sight.

We can’t confirm but it does explain how a business like Yelp can afford the kind of public relations campaigns that can get a business featured in every Murdoch/ NewsCorp paper in Australia. A US$3.3 business doesn’t saturate a market so aggressively with public relations without expecting a considerable return on that marketing investment.

Putting basic information about your business online is a great way to get free advertising, but both Twitter and Facebook are much better at being popular than they are at being profitable; whereas sites like Yelp are unsustainable, at least in the Australian market.

Picture: When checking if there was any organic buzz about Yelp online, pages categorised ‘News’ returned only public relations – stories created by a company with the intention of getting news media. “Top 100” and “Top 10” lists are easy ways for local media to win the hearts of the business operators in the area, particularly in regional Australia. 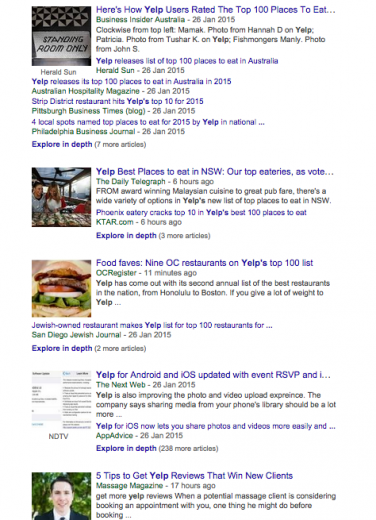 Guest: What is Yelp? An impartial review site or an aggressive ad company?

YELP allows customers to rate and post reviews of local businesses with which they have dealt. By all appearances, Yelp is providing a valuable service to the public for free. These appearances are, however, misleading. Consumers deserve to know how it treats a small business like mine.

Shortly after our company began receiving positive reviews on Yelp, an energetic Yelp salesman called me, congratulating me on our company’s online reviews, and offering to help boost our Internet presence with one of several of Yelp’s marketing programs.

Once I was finally able to get him to answer my question about what the price would be, I was staggered: $8,400 per year for their midlevel program. I politely declined.

Soon after, I noticed that positive reviews began disappearing from our Yelp site. Upon investigating further, I discovered that these had been, in Yelp parlance, “filtered,” or buried deep within Yelp’s site and difficult to access. (“Filtered” reviews have now been renamed “not currently recommended” by Yelp).

When I asked the Yelp salesman about this phenomenon, he said that Yelp has developed a sophisticated algorithm that purportedly can discern real from sham reviews, filtering out reviews suspected of being fake. In effect, Yelp claims to have developed a sort of cyber lie detector. I hope Yelp has shared this revolutionary technology with the Department of Homeland Security.

I expressed my skepticism, since the reviews of several of our customers were relegated to the filtered dustbin. I even tested Yelp’s system myself. Delighted with the service of one of our vendors, I posted a positive review of its work. Evidently, Yelp’s Oz-like algorithm adjudged me a fraud, and my review was filtered out. It has now mysteriously reappeared on the Yelp reviews for this business.

Although Yelp vehemently denies giving favorable review treatment to those who buy its services, and, with equal vehemence, denies punishing those who don’t by filtering positive reviews, I don’t buy it.

Neither do many other small-business owners, who, fed up with Yelp’s shady practices, have filed a class-action lawsuit against the company, Levitt v. Yelp. Although the case was dismissed by a federal district judge, it is currently awaiting an appellate decision from the 9th U.S. Circuit Court of Appeals.

Legions of anti-Yelp websites and articles have also sprung up, among them yelp-sucks.com and a Facebook page called Businesses Against Yelp.

Yelp’s supposedly impartial posting of consumer reviews of small businesses, when combined with its aggressive efforts to sell marketing assistance to those same businesses, poses an irreconcilable conflict of interest.

Is Yelp an impartial free service to consumers or an aggressive advertising company touting the services of paying clients over those who choose not to pay?

It cannot be both.

Terry Thomas is a small-business owner in Mukilteo. He has taught about business ethics at Seattle University and the University of Washington.

TTN: The article from the Cairns Post, also known as Exhibit A… ) SOMETHING’S BREWING: Caffiend owner Olly James is thrilled with his cafe’s inclusion in an online list of Australia’s top 100 eateries.

ONE of Cairns’ best-loved coffee haunts has gained a huge boost by being named in the top 100 places to eat in Australia.

Online review site Yelp released its annual list yesterday, based on ratings for restaurants and eating establishments across the nation. Caffiend, in Grafton St, came in at number 91.

It was one of only five Queensland restaurants on the list – the other four are in Brisbane.

Caffiend owner Oliver James (pictured) said the recognition was “very exciting” and a nod to the power of social media.

“Yelp is one of the social media platforms we use and it’s a real indication of how restaurants can use social media to their advantage,” he said. “I updated our profile on the site a few months ago and since then we’ve had lots of people come through saying they found us on there.”

For years, Yelp has been dogged by allegations that it manipulates user reviews to coerce businesses to advertise with it. While businesses aren’t likely to stop grumbling about these concerns any time soon, yesterday a federal appellate court emphatically shut the door on legal claims that Yelp extorts advertisers.

This long-running case dates back to early 2010. The plaintiffs allege that Yelp extorted them to buy advertising by manufacturing negative reviews of their businesses and manipulating user-submitted reviews and ratings about their businesses. The Ninth Circuit Court of Appeals disagreed.

Explaining that extortion by threatening economic harm “is an exceedingly narrow concept,” the court said that the plaintiffs didn’t adequately allege extortion. First, Yelp never directly threatened businesses with economic harm for failing to buy its advertising. Second, removing positive reviews wasn’t extortion because Yelp didn’t have to publish those reviews at all. Third, publishing or showcasing negative reviews wasn’t extortion because Yelp has the legal right “to post and sequence the reviews.” Finally, the plaintiffs claimed Yelp wrote bogus reviews to punish non-advertisers, but the plaintiffs didn’t provide adequate evidence that Yelp wrote those negative reviews instead of someone else. For example, even if a business couldn’t find records matching the reviewer’s details, that doesn’t mean Yelp falsified that review (compare the Yelp v. Hadeed case, which in a different legal context gave more benefit of the doubt to an aggrieved business with similar claims).

This ruling only addresses Yelp’s legal exposure for extortion. Yelp still faces other legal attacks for its handling of user reviews, including a false advertising claim and securities fraud claims. Still, this is a satisfying win for Yelp. Although the court indicated that extortion allegations against Yelp were still possible, the court’s stringent standards make it highly unlikely that businesses will assert extortion claims against Yelp for the foreseeable future. Indeed, Yelp was so pleased with the ruling that it took a victory lap: “We are obviously happy that the Court reached the right result, and saw through these thin attempts by a few businesses and their lawyers to disparage Yelp and draw attention away from their own occasional negative review.”

This ruling also helps other consumer review websites who are regularly accused of engaging in extortion, such as Ripoff Report and PissedConsumer (see Ripoff Report’s win and PissedConsumer’s unsuccessful dismissal attempt). Consumer review websites often try to sell services to businesses that are reviewed on their websites, which creates an implicit conflict of interest that can make businesses feel like they are being extorted. This ruling ought to decisively squelch future extortion claims by those unhappy businesses.

In the district court ruling, Yelp won due to 47 USC 230 (Section 230), the law that says websites aren’t liable for third party content. The appellate court expressly sidestepped Section 230 altogether, resolving the case on the definition of extortion. While it would have been great if the appellate court had applied Section 230, in some ways this is a more helpful ruling. By defining the extortion claim narrowly, this ruling gives consumer review websites an additional defense against future extortion claims.