Won’t somebody think of the children’s recreation? 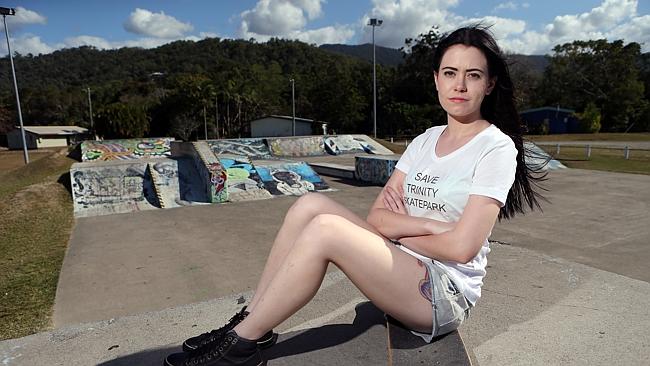 ANGERED: Kewarra Beach woman Ashlee Pigott is outraged over council’s decision to demolish the Trinity Beach Skatepark. She is willing to do almost anything to save it.

ASHLEE Pigott can barely remember an afternoon when she wasn’t kicking back and having fun at Trinity Beach Skate Park.

So when Cairns Regional Council decided to fix a vandalism problem by knocking it down, the 21-year-old wouldn’t have a bar of it.

“I was so upset when I heard the news they were going to tear down the skate park,” Ms Pigott said.

“It’s an awful shame and a complete waste of ratepayer’s money.”

The Kewarra Beach woman said she would do just about anything to save the skate park from being demolished.

“I will chain myself to the park if I have to,” she said.

“It’s definitely a community, a real safehaven for kids and teenagers who don’t have anywhere else to go.

Ms Pigott said she had fond memories of her time at the park as a teenager.

“Ever since I was a kid, I always hung out there, whether it was with my friends or I needed somewhere to get away from home,” she said.

“I practically grew up there.”

The park is slated for demolition in the near future, with a new, bigger skate park to be built at Smithfield at the same time.

The site will be turned into a public carpark.

But Ms Pigott said the proposed new skate park would be too far away for most teens living on the northern beaches.

“We need more outdoor recreational areas for kids and teenagers, not less,” she said.

“The skate park is the only thing the northern beaches has and it accommodates kids from Clifton Beach, Kewarra Beach, Trinity Beach and Trinity Park.”

And Ms Pigott said the problem of vandalism at the adjacent sporting precinct had been solved since CCTV cameras were installed at the park and police stepped up their patrols.

“The police are there every night, stopping by every 10 to 15 minutes to make sure nothing’s happening,” she said.

“My question is why do they need to tear down the park if they’ve already got all that going on?”

“I don’t want to see future generations of the northern beaches miss out on such a great place,” she said.