Women taking on bigger roles in the AFL 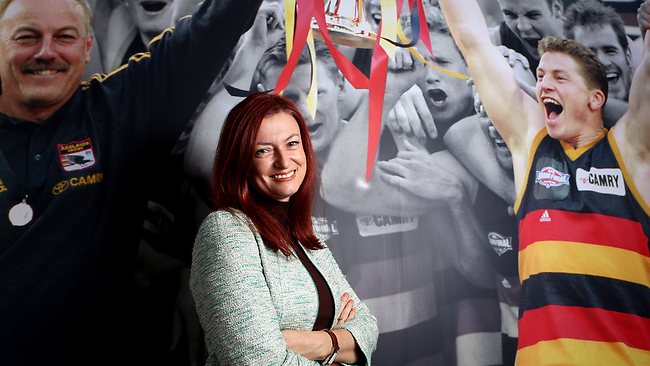 TTN: The seeds of the first professional AFL women’s league will be placed on the MCG on Saturday with an all-female game between the Western Bulldogs and Melbourne. By having female board members on every AFL board in the country, leaders hope to attract bigger crowds to every game by considering the needs of women players, spectators and mothers.

Michelangelo Rucci: Time to mark a bigger role for women in the AFL

IT’S Women’s Round in the AFL. For one weekend – against a full winter of women carrying the hopes of men in a game – the AFL wants to recognise, honour and pay tribute to women. So they should.

The ceremonial weekend is to be played against a reminder of how men are behaving badly, again. Drug code abuses at Essendon. Rape allegations at St Kilda. Racial gaffes in the high presidential office at Collingwood. Contracts with secret clauses at Adelaide. Game manipulation (also known as “tanking”) at Melbourne. Players scaring unsuspecting residents with fake police raids in Geelong.

The image of Women’s Round will, hopefully, move beyond the scene of a mother or a player’s wife/girlfriend tied to a washing machine dealing with the latest mud-stained guernsey, or slaving over a hot oven baking for the cake stall down at the local club, or waiting for hours in the carpark for the boys to finish their A7 amateur game in suburbia.

In the AFL club system it has certainly gone beyond women guarding the club chief executive’s phone, typing the minutes from board meetings and sending out game and carpark tickets to the sponsor’s latest guest list for the corporate box. AFL chief executive Andrew Demetriou’s wish – to many it seemed a demand – to have at least one woman on every AFL board has proven the value of breaking down barriers.

At Adelaide, there are two female directors – Kate Gould and the strong-minded and clear-thinking Deb Miller.

At Port Adelaide, there is former federal senator, minister and Australian ambassador to Italy, Amanda Vanstone.

The account of her first board meeting at Alberton – to be told in full in Saturday’s Advertiser – left such a forthright impression that it silenced the cynics who question how a Liberal, let alone a woman, has made it into a boardroom where Bob Hawke and Mick Young spilled beer.

Port president David Koch repeatedly highlights the benefits the Power has gained from Vanstone’s experiences, particularly when the World Anti-Doping Agency set up its board in the lead-up to the Sydney Olympics in 2000.

At a time when every AFL club is trying to avoid the pitfalls uncovered at Essendon, Port’s integrity officer Peter Rohde need only call Vanstone to have access to the best advice and contacts for dealing with the challenging subject of drugs in sport.

AFL Women’s Round does take a step closer to the elite football field this weekend – and beyond the goalsquare with famed goal umpire Chelsea Roffey.

The seeds of the first professional AFL women’s league will be placed on the MCG on Saturday with an all-female game between the Western Bulldogs and Melbourne. There has been a draft to align players to the teams.

They will play for the Hampson-Hardeman Cup in recognition of Barb Hampson and Lisa Hardeman, who in 1988 set up the first women’s national football championships.

There is a grand plan for every AFL club to ultimately have a senior women’s team.

And then there will be a women’s round every weekend.