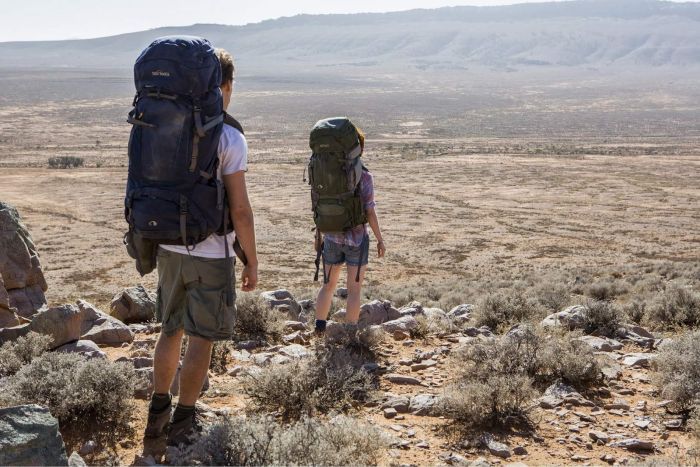 He’s one of the creepiest characters ever to roam the Australian outback.

But far from scaring people away, serial murderer Mick Taylor, from the movie Wolf Creek, seems to be having the opposite effect.

Tourists are going out of their way to visit Wolfe Creek Crater in the remote West Australian Kimberley because of its association with the film.

With a sequel to the original 2005 film due out this week, local tourism manager Chris Telenta is milking the publicity for all it’s worth.

‘People now know the name, and where they might not know the name Halls Creek or Kimberley many are coming and saying where’s this Wolf Creek?’

‘The younger people, they’re the ones coming in and saying, “I’ve heard about the movie and I’m a bit scared”. They’re very tentative but they’re excited. They want to go out there and they want to stay the night.’

It received little attention until director Greg McLean used it as the setting for his 2005 film, although the movie misspells it and was actually filmed in South Australia.

Wolf Creek 2 takes off where the first film finished, showing Mick Taylor coming across his latest victims at the crater, a German couple, and later a British backpacker named Paul.

‘The story basically becomes a game of wits between Paul and Mick as they sort of duel to the death across the outback’, says Greg McLean.

‘It’s a very different film to the first film in that it’s very much more of a chase, suspense story.’

Dr Gemma Blackwood, lecturer in communications at Charles Darwin University, says films with a negative storyline attract people to the place where the film is set.

‘The people who watch horror films are often young people and the people who like a bit of adventure and a bit of fun, and they’re the same sort of people who end up being backpackers to northern Australia.’

Mark Ryan, a lecturer in film and television at Queensland University of Technology, says Wolf Creek is part of the well-established ‘outback horror’ genre that includes Razorback, Howling 3, and Rogue.

Ryan says the laconic, sarcastic Mick Taylor is the flipside of Mick Dundee from Crocodile Dundee.

‘He’s taken from the archetype but is the dark perverted version of that.’

Dr Blackwood says Mick Taylor plays on perceived strains in the national character including xenophobia, racism and sexism: ‘a nightmarish vision, a representation of Australian masculinity that we just don’t want to have.’

‘We had a massive response to this film in Europe … particularly Germany, France, Spain and the UK,’ he says.

‘For the Brits, for 20 years they’ve been hearing about terrible things happening in the outback with the Ivan Milat case and the Joanne Lees case.

‘Australia is one of the last frontier places where you can go and adventure in the world. [The film] fed into people’s morbid curiosity about those cases.’

Meanwhile at Halls Creek, Chris Telenta says excitement about Wolf Creek 2 is building, and his dream is to have actor John Jarratt, who plays Mick in the film, visit the town.

‘I see it as a horror comedy and I play on that. I’ve even got t-shirts I sell called “I survived Wolfe Creek Crater”.’