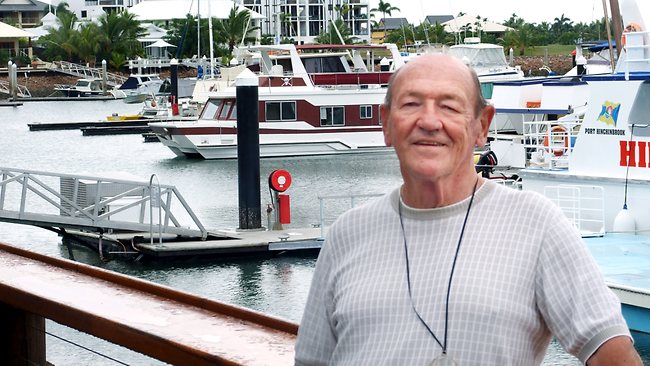 IMAGE: Developer Keith Williams, pictured at his Port Hinchinbrook development near Cardwell, in north Queensland, has died at the age of 82. Image from The Australian.com.au

TTN: Keith Williams, pioneer developer of Sea World and Hamilton Island resorts is being posthumously blamed for pollutants being regularly spilled into The Great Barrier Reef from his failed Port Hinchinbrook Resort.

Repeated spills have raised health fears for Cardwell residents and the Environment Department has spent two years unsuccessfully trying to get the Williams Corporation to fix the problem.

It is unclear how much sewage has been dispersed, but pollution events occurred in February 2011 after Cyclone Yasi and were recorded last year in July, November and three times in December.

Alliance to Save Hinchinbrook spokesperson Margaret Moorhouse, who logs what is happening at the site, said residents were upset after a spill at Christmas.

“Over Christmas they did have a nasty looking mess there and the residents got pretty upset,” she said.

“We have always been concerned about the Hinchinbrook channels and the effect on the Reef. It is a really difficult problem. You have to preserve the asset  trash it and you have nothing.”

Department executive director Rob Lawrence said it was unclear how much sewage was spilt, but the treatment plant and ancillary pump stations remained non-compliant and investigations continued.

A Right to Information search shows an inspection last November found that, even with the plant operating, its effluent did not meet standards for nitrogen, phosphorous, oxygen and faecal coliforms.

Pollutants such as these are believed to have spawned a devastating crown of thorns starfish outbreak on the Reef.

The department issued an environmental protection order to the company in January.

A briefing to Environment Minister Andrew Powell said: “Any failure … to bring (the sewerage plant) into compliance has the potential to cause environmental harm and public heath issues.”

Williams Corporation did some work on the facility, but has since gone into administration and the development is in the process of being sold to AA New Image Developments, which have been maintaining the plant since last month.

The controversial $100 million development has turned into an administrative nightmare for the Government, with taxpayers having to pay $849,316 for emergency dredging works after Yasi to clear a path between a public boat ramp and the ocean.

The company left $6000 in fines and a further $120,000 in unpaid fees, issues that have been referred to the State Penalties and Enforcement Registry for recovery.

A briefing to Mr Powell warns that hundreds of thousands of dollars need to be spent on the sewerage plant.

The resort project was one of the major conservation battles of the 1990s, with activists arguing it was too large and would threaten the Reef.

The late Mr Williams never built the 1000-room resort he promised, although the marina has some cabins.

It was backed by the then state Coalition and the Wayne Goss Labor government, which tried to clean up a mess caused by an earlier failed project from the Bjelke-Petersen days.

Port Hinchinbrook caused a bitter split between Mr Goss and then federal environment minister John Faulkner, who opposed the project because of its potential threat to the Reef. The Coalition government of John Howard later approved it.

Mr Williams’ son Ben, who has been running the company, could not be contacted for comment.

Administrator Joanne Dunn, of FTI Consulting, said a sale contract had been signed that included all Williams Corporation land at Cardwell and a Hinchinbrook Island resort.

Ms Dunn said the main creditors were banks and the Williams family, which had injected cash.

New Image proposes to finish Mr Williams’ project and is seeking venture capital or equity partners to pay out $12 million in debt and fund a further $13 million of development.

Managing director Andrew du Boulay said investors would quickly get a high return due to the acquisition occurring at the bottom of the real estate cycle, the company’s expertise and the intention to float the resort on the Australian Stock Exchange.

The development operates under a Deed of Agreement between the company, the Cassowary Coast Regional Council and the federal and state governments. A service company looks after maintenance issuesusing fees paid by land owners.

But some owners have withheld fees because of disputes with Williams Corporation, while the marina’s commercial premises are largely empty.

A group has been set up to normalise governance, but Cassowary Coast Mayor Bill Shannon said ratepayers would not pick up the treatment plant repairs for the 200-odd landowners at Hinchinbrook.

Cr Shannon said the marina was yet to be dredged after Cyclone Yasi.

“The boats have been removed under insurance claims but I reckon there’d be barbecues, garden furniture, dinghies and all sorts of things in there,” he said.

Keith Williams, the developer who transformed Queensland tourism, dead at 82 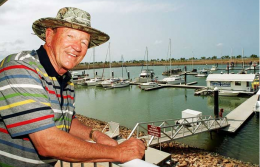 IMAGE: From the Townsville Bulletin, story from The Australian

KEITH Williams, the former postman who brought Australian tourism into the modern age with his development of the Sea World and Hamilton Island resorts, has died on the Gold Coast.

The legendary entrepreneur – one of the original members of the “white shoe brigade” on the Gold Coast – was in ill health for several years and suffered a series of strokes over the weekend.

Mr Williams’ son Ben paid tribute to his father, who died this morning, saying he was a “remarkable entrepreneur and family man” who had created thousands of jobs and entertained millions of people.

“His contribution to Australian tourism is probably without peer,” Ben Williams said.

“But it was providing entertainment to people that gave him his greatest satisfaction.”

Mr Williams, 82, was the son of a postman and started his adult life in the footsteps of his father.

But his love for water-skiing and its growing popularity in Australia in the 1950s led Mr Williams to start up the Surfers Paradise Ski Gardens on the Nerang River.

He became Australian water ski champion in 1959 and in 1965 staged the world championships on the Gold Coast.

In 1971, after borrowing everything he could, he opened Sea World.

“He started from nothing and throughout his career risked everything on his new ventures,” Ben said.

With a fortune once estimated at more than $150 million, Mr Williams was one of the original members of the “white shoe brigade” of Gold Coast developers who backed then-National Party premier Joh Bjelke-Petersen in the 1970s and 1980s.

Mr Williams retired in 2008 after suffering a stroke.

Ben, his sister Rebecca and their mother Thea had maintained a bedside vigil in recent days.

Mrs Williams was with her husband of 45 years when he died at 4.40am today.

“Our thoughts and deepest sympathies are with Keith’s family,” he said.

“Keith made a significant contribution to development in Queensland, particlarly in the tourism industry and around my home town (Proserpine) near Hamilton Island.

“His life was not one without controversy, but there can be no doubt he made a big contribution to our state.”