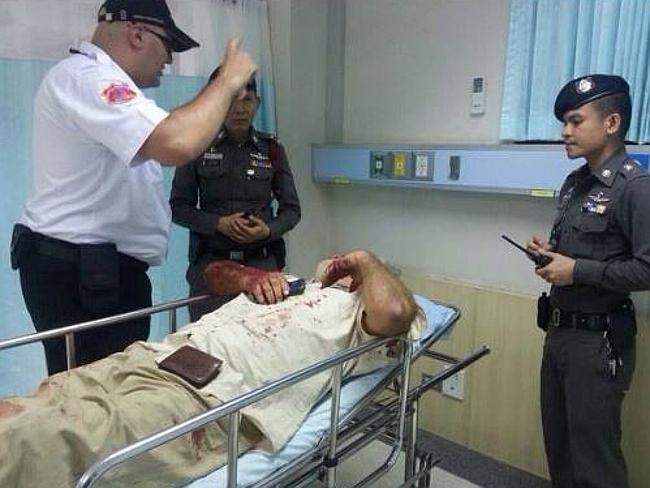 Now the former Perth businessman, a “highly regarded” member of the expat community, is making headlines charged with killing a security guard while trying to break up a nightclub scuffle.

The 59-year-old was walking past the Taipan nightclub in Patong beach just after midnight on Wednesday when he came across an incident involving a security guard and a number of Australian and Indian tourists. In an interview from a police cell, Mr Pendlebury told Phuket Wan news site he had stopped to film the violent incident.

“I pulled out my camera to record what was happening and a security guard tried to stop me doing that,” he said.

“Before I knew it, I was being badly beaten up.”

Mr Pendlebury went on to say how he pulled out his knife and “waved it back and forth to defend myself”. The tourist operator, who has been living in Thailand for about 10 years, said he believes he was saved by tourists who came to his aid.

“A couple of Indians jumped in and with their help I was able to escape a little distance down the street,” he said.

“If the Indian tourists hadn’t rescued me, I reckon I would be dead.”

Mr Pendlebury was taken to hospital along with the 26-year-old security guar Sanya Khluaewaengmon, who died in hospital of stab wounds around 2am.

Mr Pendlebury is being held by police charged with murder. Thai police say they have alerted Australian authorities. The incident comes days after volunteers who patrol the usually peaceful holiday island walked off the job last week because of a disagreement with local police over a lack of support. Volunteer ‘tourist police’ have only today resumed their patrols after meeting with local authorities and negotiating regular meetings, Phuket Wanreports, adding the expat’s arrest has shocked locals.

The expat is highly regarded within the community, one of his friends told news.com.au. As well as running his sailing tour business since 2004, he is involved with local charity and was on his way home from attending a Rotary meeting when he became involved in the fatal altercation.

A fellow Rotary club member described Mark to news.com.au as “a very good guy”, and said he had lots of support in the local expat community.

“He will be well looked after.” His boating business, Phuket Sail Tours, boasts of being a “family run business” which Mark runs with his Thai wife Cha Cha, whom he married in 2008.

Captain Mark is “known for his typically dry Australian sense of humour,” and is “never seen without his captain’s pipe and hat”, according to the company website.

On TripAdvisor, the tour operator is regularly praised for his “great service” and being an “amazing” guide, earning the business an “excellent” rating, the highest possible score, from almost 1400 reviewers.

Mark had been personally replying to messages from tourists up until Tuesday before being arrested that night.

His colleagues would not comment on Mr Pendlebury’s charges but confirmed tonews.com.au he was in Phuket.

Australian consular officials from the embassy in Bangkok are providing assistance. A bail hearing is likely to take place today.