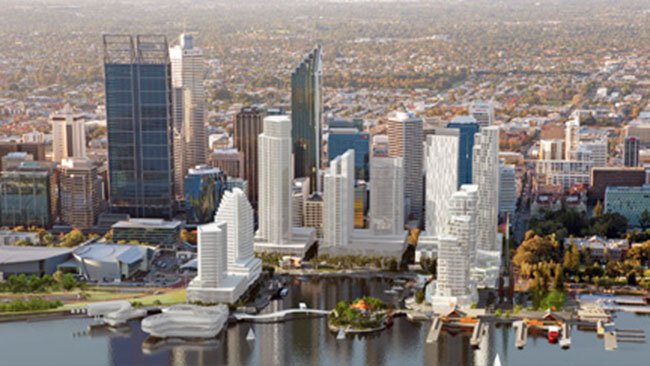 The WA government today attempted to wrap some velvet around the expected sledgehammer to come with the state budget this week, releasing new images of the Elizabeth Quay project transforming Perth’s riverside.

With weeks of warnings about Thursday’s tight WA budget, which is tipped to bring higher charges to consumers and more public service cuts, Premier Colin Barnett revealed the first stage of the multi-billion dollar development is close to completion.

Divers are now spending hours beneath Perth’s CBD upgrading the city’s main stormwater drain, while construction of the project’s inlet is on target to start within weeks.

The government claims construction of Elizabeth Quay will create more than 400 jobs, office space for 10,000 people, 800 residential apartments and 25,000sqm of retail space.
And after being hammered for a string of broken promises since his March 9 election win, Mr Barnett was keen to sell his government’s achievements since then.

In those 20 weeks, a myriad decisions have been made across all portfolios,” he said.

Major projects like Elizabeth Quay, Perth City Link, Riverside and the Perth Cultural Centre are creating hundreds of jobs and will attract billions of dollars in private sector investment that will stimulate WA’s economy.”

The government decisions have also included cuts to 1200 public sector jobs, and the merging of local metropolitan councils, which has infuriated many mayors.

The first stage of the project, the laying of groundwork for the waterfront precinct, is nearing completion, Mr Barnett said.

“Elizabeth Quay alone will create 400 construction jobs and the first stage of the project is nearing completion now,” he said.

Mr Barnett said the new design images better highlighted the detail that has gone into designing the public areas, which include a children’s playground on a small island, a water feature at Station Park, three retail kiosks and a season mooring for the Duyfken replica.

The public realm around the waterfront inlet will be available for public use in mid-2015.