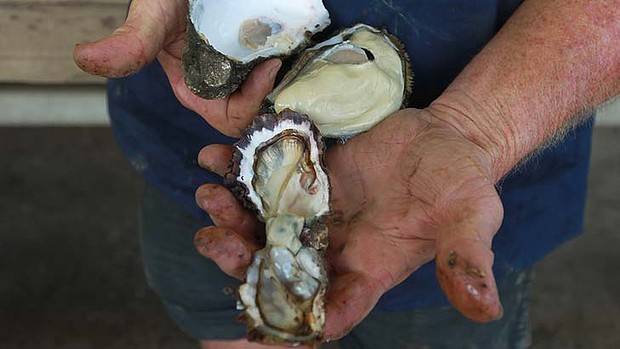 WHEN the news came through, the fourth-generation oyster farmer Rob Moxham said it made him feel sick to his stomach.

”We were hoping it wouldn’t get here but we were half expecting it,” he said.

With no resistance to the virus, oysters that had been healthy on Monday were felled – in their millions – virtually overnight.

With them went hopes that many of the Hawkesbury’s 15 growers would have any produce by the end of this year.

Mr Moxham said mature stocks could run out sooner, especially if the infection spread before they could reach the market. ”In 24 hours it wiped out probably about 90 per cent of the oysters over a 50-hectare area,” he said. ”It’s just so devastating.”

The outbreak, which poses no health risk to humans, comes less than a decade after the Hawkesbury’s Sydney rock oyster crop was obliterated by the QX disease in 2005.

Some growers who, as a result, had switched to the ”spawnless” fast-growing Pacific oysters were talking of calling it quits this time.

”I’ll try to stay on,” Mr Moxham said. ”I can’t see myself being able to sustain all my staff.”

The Department of Primary Industry’s aquaculture manager, Ian Lyall, said it would meet farmers on Tuesday to discuss assistance.

The Hawkesbury produces more than 300,000 dozen oysters a year, about half the state’s Pacific oysters, worth about $2.4 million.

The president of the Broken Bay Oyster Association, John Stubbs, said the outbreak would cost farmers a ”substantial amount” of money. ”There’s several million oysters in Mullet Creek,” he said.

About 20 per cent of the local industry’s 245 hectares has been affected by the virus. A quarantine is in place to try to prevent its spread.

The Sydney Fish Markets said the price and availability of Pacific oysters were not expected to be affected by the virus, which was first detected in NSW in 2010 when it hit crops in the Georges River. An outbreak was found in Sydney Harbour soon after.

Richard Whittington from the University of Sydney’s faculty of veterinary science, has been working with the industry to reduce the risk from the virus.

He said it was unknown what triggered an outbreak but there was a ”very strong possibility” that unusual seasonal conditions – such as last week’s heatwave – had reduced the oysters’ immunity.

It might also have spread naturally in ocean currents, he said, or have been transported on the hulls of pleasure boats or in the ballast of commercial ships.

Government and industry groups were working to develop disease-resistant varieties of the Sydney rock and Pacific oysters.

But Mr Moxham said some farmers would have to give those solutions time to work.

”I’m trying to make it so there’s a fifth generation,” he said.