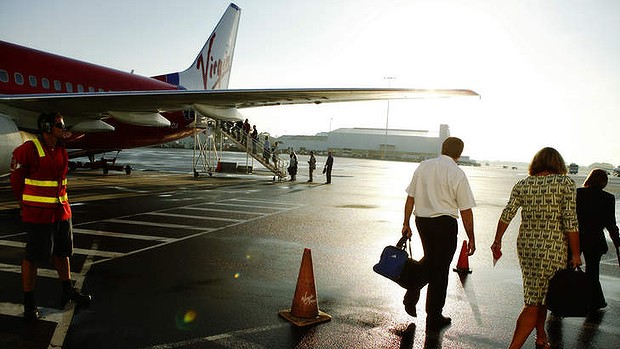 Virgin Australia wants Sydney Airport to build a rapid-transit system between its terminals after baulking at plans to place all the airline’s operations at what is now the international terminal.

The airline has serious concerns about a plan to base Virgin’s operations and those of its alliance partners at T1, which is likely to derail the airport’s aim to remove the split between the domestic and international terminals.

Removing the split has been central to the airport’s long-term strategy to cope with an expected surge in demand over the next two decades, thereby reducing the need for urgent action on a second airport.

Virgin is urging the airport to investigate building a high-frequency, light-rail link between what are now the domestic terminals – known as T2 and T3 – and the international terminal, or T1.

The airline believes that will be a considerably cheaper option than the currently planned redevelopment of the terminals, which is expected to cost billions of dollars.

Virgin chief executive John Borghetti said the existing plan would not solve the difficulty for passengers getting to the other side of the airport to catch connecting flights.

”The current facilities are Third World – and that means cab, bus or train,” he said.

”We are still going to have separate terminals [if the airport proceeds with its plans], and irrespective of who is in them, we haven’t solved the transfer issue between those two terminals.”

He described the existing rail link between the international and domestic terminals as ”difficult to find, difficult to get to and in a different league … to lots of airports in Asia”.

The ”commuter train” did not run frequently enough, he said.

Many airports around the world are well served with light-rail links connecting terminals every three to five minutes.

Mr Borghetti said Sydney Airport’s owner also had plenty of experience with a rapid-transit system at Rome airport, in which it once had a cornerstone stake.

”Almost anywhere you look, airports that are designing the airport of tomorrow will have some kind of easy-transfer facility between terminals – it is usually some form of light rail,” he said.

Virgin has made clear it will fight any plan which disadvantages both its passengers and those of alliance partners including Singapore Airlines by basing their operations further from the central city than competitors Qantas and Emirates.

It has been proposed that all Qantas and Emirates operations would be based at T3, which is a shorter drive to the CBD.

The airport’s plan to redesign the terminals also depends heavily on the early return of the long-term leases that Qantas has on the third terminal and adjoining base for its jets.

A spokeswoman for Sydney Airport said its plans to base domestic and international flights from the same terminals would allow for a ”greater number of intra-precinct transfers”.

But she said it would continue to talk with airlines about ”enhanced solutions”, pointing out that the airport was ”fortunate to have a train line that serves both precincts”.