Ultimate battle between residents and business 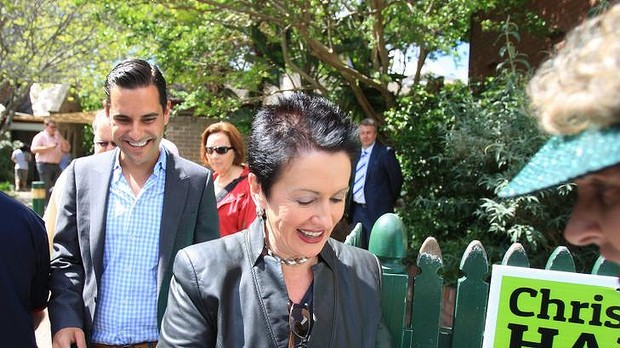 Lord Mayor Clover Moore and Member for Sydney Alex Greenwich on the hustings in 2012: Both have spoken out against plans to force city businesses to vote in council elections. Photo: James Alcock

Sydney’s Lord Mayor Clover Moore has hit out at plans to force 80,000 businesses to vote in council elections, accusing the state government of undermining democracy in a desperate bid to draw public attention away from the scandals plaguing the Liberal Party at ICAC.

Business owners will be automatically enrolled to vote in the city’s elections under the proposed changes to the City of Sydney Act – a move widely expected to undermine Cr Moore’s hold on the mayoral chains next time council heads to the polls.

The government will back a Shooters and Fishers bill expected to be introduced into the lower house on Tuesday that would flood the City of Sydney’s electoral roll with businesses, which would have up to two votes each.

Under proposed changes, City of Sydney businesses would have up to two votes each in council elections. Photo: Louise Kennerley

The current arrangements, which require businesses to re-enrol for every election, “effectively disenfranchise a large proportion of those who pay the rates of the City of Sydney,” Premier Mike Baird said.

“This is a fundamental flaw in the democratic system of local government elections which is denying many businesses a say in how their council is run, and one I intend to fix,” Mr Baird said.

Last election only 1700 businesses cast votes, out of 100,000 registered voters.

The proposal, floated in March by a state parliamentary inquiry, would force the council to adopt a model similar to that of Melbourne, where it is mandatory for businesses and landlords to vote in elections.

But Cr Moore said the Melbourne model was flawed “and leaves Sydney exposed to serious corruption”.

“This is a Government desperate to distract the public from the findings of ICAC and the corruption that’s been exposed between the Liberal Party and developers,” Cr Moore said.

“The Premier won’t stand down a Liberal MP who has confessed to taking bribes from developers, but instead is rushing a bill to reduce the say of local residents.”

Cr Moore likened the proposed changes to the dual-role legislation, or “get Clover” laws, that forced her to relinquish her state seat of Sydney.

“I’m confident the community will see this for what it is – an attempt to manipulate democracy and take control of the City,” Cr Moore said.

“It’s not fair or democratic to give businesses two votes and residents just one.”

Member for Sydney Alex Greenwich said he was concerned the government was rushing through the bill without consultation.

“I’m concerned that their bill may allow vested interests to rort the voting system, drowning out the voice and vote of small businesses and residents,” Mr Greenwich said.

“The businesses I talk to love the work Clover is doing, but are deeply concerned about serious allegations against Liberal members while they have been in government.”

But independent councillor and small-business owner Angela Vithoulkas has been lobbying for this change for years.

She told Fairfax Media better representation of small businesses would change the way councillors approach elections and the policies they promote.

“Councils need to genuinely look at what we can do to stimulate local economies, because state and federal government won’t,” Ms Vithoulkas said.

“Small-business owners have been slugging it for years and paying the rates that make Sydney so strong. Now they finally get a voice without having to jump too many hoops.”

Ms Vithoulkas added while it was great news for the city, she was concerned no one on the council or in local business had yet seen the draft legislation.

“It’s disappointing the legislation has so far been kept away from stakeholders. A focus on big business rather than the whole range would be concerning,” she said.