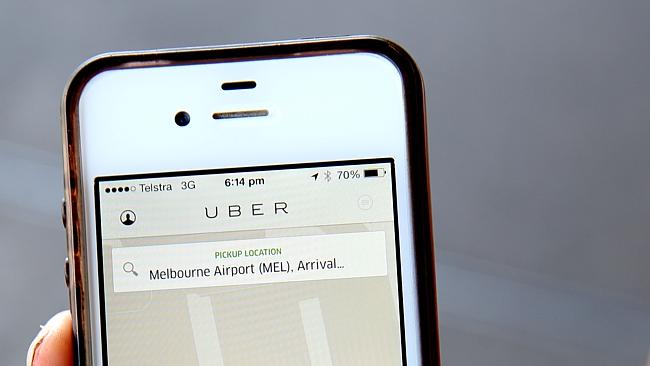 TTN: The NewsCorp-run Cairns Post ran this picture with the tagline: “Uber may end up being a short-lived fad in Far North Queensland. PICTURE: TIM CARRAFA”

UBER may just be a short-lived craze in the Far North, leaving the city with a seriously depleted taxi industry.

The controversial car ride-share service is preparing to launch in Cairns within the next three months, at the same time as Townsville.

The popular California based start-up, which operates in more than 50 countries, is in wide use in Australia’s major cities, including Brisbane, despite being outlawed in Queensland.

The Department of Transport and Main Roads has so far issued more than $537,000 worth of fines to Uber drivers.

Cairns Taxis has warned the service could endanger passengers, with vehicles that are uninsured and drivers that are not vetted by authorities.

“From what I’ve seen, they’re just so much riskier than our existing taxi system,’’ he said.

“There’s very little regulation of the motor vehicle, the drivers, the company itself – it’s just a fad, really. There’s every possibility that in a year’s time, there will be no Uber.”

He said because the company was in direct competition with the regulated taxi industry, the Far North could be left with a drastically reduced cab service if Uber failed.

“I think that taxi drivers and taxi companies, generally, while they do okay for themselves, they’re not printing money by any means,’’ he said.

“They’re in a very tough industry and it’s only getting tougher. They provide a valuable service to the community and they do so in a way that protects the service’s users.

“When apps and companies like Uber come in and offer alternatives, they do so at much higher risk and to the detriment of our existing service.”

Mr Cameron, however, said it was only a matter of time before the company’s business model collapsed.

“It’s probably to do with insurance and/or the contracts that they use that are either illegal or unenforceable, because initially when people download the app, they agree to all these terms and conditions in their contract with Uber,’’ he said.

“Essentially they waiver a lot of the rights that they think that they have when they use public transport.

“What they’re getting with Uber is they’re basically hopping into cars with strangers.”

The Insurance Council of Australia has warned drivers and passengers may be exposing themselves to substantial financial loss if involved in a collision while using car ride-sharing services.

It has encouraged anyone planning to provide the services to ensure it is legal in their state or territory, and that any licensing or regulatory requirements have been met.