Two years of government work – with no EIS 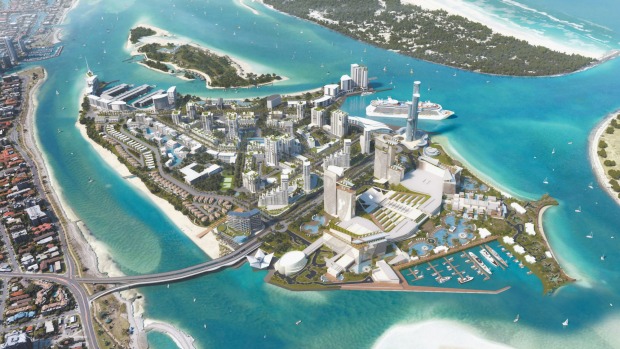 The new Queensland Labor state government are claiming victory over Chinese developer ASF Consortium by denying the use of Wavebreak Island as a cruise ship terminal. Whilst the government says ASF have been persuaded to find another site, ASF say that they are confident the proposal will go through after they complete an Environmental Impact Statement. Which begs the question – how has the Gold Coast Council or QLD government spent two years on any such important project without an EIS?

Ecologically and economically sensitive, the Gold Coast broadwater is feat of engineering, a national icon and (whilst a bit ‘trashy’ in a Vegas way), it is one of our most successful tourism destinations and a failure in process there will be a clue as to what other tourism regions experience.

To have Fairfax media reproducing a press release on the halting of the project without questioning the process – allowing the government to claim the role of community champion but not holding the government to account for what they should have been doing in the first place i.e. insisting on an EIS from the developer – is altogether alarming.

Potentially more concerning is News Corp’s coverage – claiming lost millions in industry for the people of the Gold Coast.

From The Sunday Mail, aka The Courier Mail, aka NewsCorp/ News Ltd, Whatever they wanna call themselves these days, 10th May 2015

TOURISM revenue worth millions of dollars a week is sailing straight past the Gold Coast after the sinking of the city’s biggest-ever tourism project.

The State Government’s decision to veto a $7 billion casino resort and cruise ship terminal project planned for Wavebreak Island has city leaders scrambling for alternatives to ensure the Gold Coast does not continue to miss out on a slice of what is now the tourism industry’s fastest growing sector.

Industry data obtained by The Sunday Mail reveals up to 75 ships a year would now be docking at a Gold Coast cruise ship terminal – if one existed.

In Hawaii, a tourism destination with striking similarities to the Gold Coast, 66 cruise ships are expected to visit this year. Brisbane’s cruise ship terminal expects to welcome a million visitors over the next four years.

Some 100 ships docked at the Queensland capital last year.

The ill-fated proposal by the ASF Consortium was seen as the most viable option for the Gold Coast from a list of possibilities which included man-made harbours at The Spit and Bilinga.

However, the project did not have the backing of the new Labor Government, which has ruled out a cruise ship terminal on Wavebreak Island. Up to 75 ships a year would now be docking at a Gold Coast cruise ship terminal – if one existed.

“The reality is that the cruise market continues to grow and, so long as the Gold Coast is not part of it, our reputation as Australia’s tourism capital is at serious risk,” he said.

“And with each cruise ship visit injecting up to $500,000 per visit into the local economy, it’s easy to see the staggering amount of income locals will now miss out on.”

The Queensland Government on Tuesday ended a private consortium’s two-year bid to build a cruise-ship terminal on a man-made sand island in the Gold Coast Broadwater.

Labor has always opposed the location for the cruise ship terminal, describing the man-made island as unsuitable for the project and questioning its environmental impact on the Broadwater.

After the meeting Dr Lynham announced he was still unsatisfied with the location and has encouraged the consortium to look at alternatives sites.

“As we said during the election there will be no development on Wave Break Island,” Dr Lynham said.

“The Broadwater belongs to the people of the Gold Coast.”

Dr Lynham said the government valued the commitment of the ASF consortium to Queensland and its respect for our processes, the environment and the community.

He said the application by ASF Consortium to develop Wave Break Island has been halted.

“The government has decided to suspend the current process and consider better investment opportunities,” he said.

“We are committed to advancing tourism opportunities and economic growth but with environmental and social safeguards.”

Wave Break Island was created in 1985 as part of the Gold Coast Seaway construction.

The man-made island protects the western foreshore of the Broadwater and stabilises the seaway entry.

Community Group Save Our Spit – who has long opposed the development – welcomed the decision by Dr Lynham.

“The Labor government has cited environmental and community reasons as the main drivers of their stance – a stance they held loud and clear in opposition, through the election and into government,” the group says on its Facebook page.

“The government has stood firm on their commitment to Queenslanders for there to be no critical asset sales or the giving away of state assets, including the public waterways and lands of the central Broadwater.”

“We welcome the news and support the current government for their strength and steadfast commitment to their promises, and we absolutely thank each and every one of you for your ongoing support, participation and commitment as part of a community collective that has fought for a better future for the Gold Coast and Queensland.”

Earlier today ASF’s local director John Sheppard told the ABC the consortium had scaled back the original proposal and wanted time to improve the environmental outcomes for the project.

“So reducing its scale, improving the environmental outcomes of the project, all of those sort of things the Government would appear to be concerned about, we certainly believe we can adapt into a revised proposal,” he said.

“The project will take up to two or three years for approvals and 10 years to build and deliver, ” Mr Sheppard said.

The consortium on Tuesday morning said it wanted the opportunity to conduct an environmental impact study.

Mr Shepherd said doing an EIS was the only way to prove to the community what the impacts of the project would be.

Dr Lynham expected the consortium to look for other sites for the cruise ship proposal.

The Queensland government has backed away from controversial plans to allow a cruise ship terminal to be built on state-owned land on the Gold Coast.

Deputy Premier Jeff Seeney announced on Tuesday that in response to community concerns, vacant land at Doug Jennings Park and parts of the Southport Spit would not be made available to Chinese property company ASF Consortium as part of its application for an integrated development licence.

The company plans to build a mega-resort on the Broadwater, which would include a casino and cruise ship terminal.

“The very clear message from all Gold Coast MPs is that the community does not support the development of Doug Jennings Park and wants The Spit retained as a recreational area,” Mr Seeney said.

“We have heard their views and acted on them.”

However, Mr Seeney said ASF Consortium has updated its concept plan to relocate the cruise ship terminal from The Spit to Wave Break Island.

“Its plans still propose significant development on or around The Spit,” he said.

The announcement comes after the a recent Galaxy Poll found 78 per cent of Queensland voters thought Premier Campbell Newman’s government was losing support because he was arrogant, while 62 per cent thought he didn’t listen to community concerns.

Deputy Opposition Leader Tim Mulherin said the Liberal National Party government had only acted because of bad polling and the threat of an “electoral wipeout”.

“This is great news for the people of the Gold Coast, but if the LNP had’ve listened to them and to Labor in the first place it didn’t have to go this far,” Mr Mulherin said.

“Labor investigated similar proposals in 2006 and ruled it out.

“The LNP has dredged up this idea, spent untold millions of taxpayer dollars looking at it, only to come to the same conclusion.”