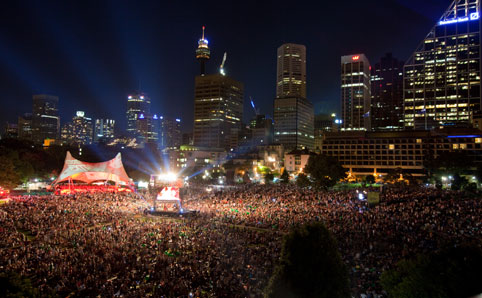 AFTER 21 years, Tropfest founder John Polson says it’s time for a change, so the world’s largest short film festival will move to a new time of year and a new home.

The 22nd Tropfest will be held on December 8 this year and will move from The Domain to Centennial Park in Sydney.

“February is always a tricky month,” he told AAP, particularly for people in the film industry wanting to visit.

Aside from the Berlin Film Festival, “it’s the BAFTAs, the Oscars, it’s this, it’s that.

“We think we’re pretty big but I don’t want to take on the Oscars.”

When Tropfest started in 1993, Polson says nobody knew what it was but as the festival has grown bigger there’s been a significant increase in visiting international guests.

“We’ve really been thinking, where’s the best place to fit in with the global calendar of these film events?”

However, the weather has also played a small part in the decision.

Only one Tropfest had to be shut down but an enormous downpour last year certainly dampened the night.

“If you look it up, statistically Sydney has almost double the rainfall in February than it has in December, so I’m not going to pretend that didn’t have something to do with it either,” he said.

The popularity of the film festival, which began in Sydney’s Tropicana Cafe, has contributed to the date change as well as the new location.

“People are coming in earlier and earlier to get their space… but now they’re there for 8 or 10 hours and we’re trying to give them great stuff to do,” he says.

There are many ideas in the pipeline, including A-list live music acts.

However, The Domain will always be an incredible part of Tropfest’s history.

Polson said when they moved there in 1999 most people thought they were crazy.

“You know: ‘You’re never going to fill it, this thing’s going to completely tank, because it’ll be half full and everyone will think you’re a failure’,” Polson says.

“And frankly I was one of them.”

Of course that didn’t happen and Tropfest now attracts a live national audience of about 150,000 people as well as featuring on free-to-air channel SBS One.

Polson says one of the things they’ve learnt at Tropfest is “even if you’re on a great wicket, you cannot just breeze it”.

He says it’s no coincidence the new Tropfest signature item (TSI), which has to be included in every short film entry, is ‘change’.

“The reason is we want to embrace change,” he says.

“It’s easy to be afraid of change… (but) you’ve got to be courageous if you want a pay-off.

“This is going to take some guts and we’re hopefully going to get some glory.”