Transform with NBN or miss out: Conroy 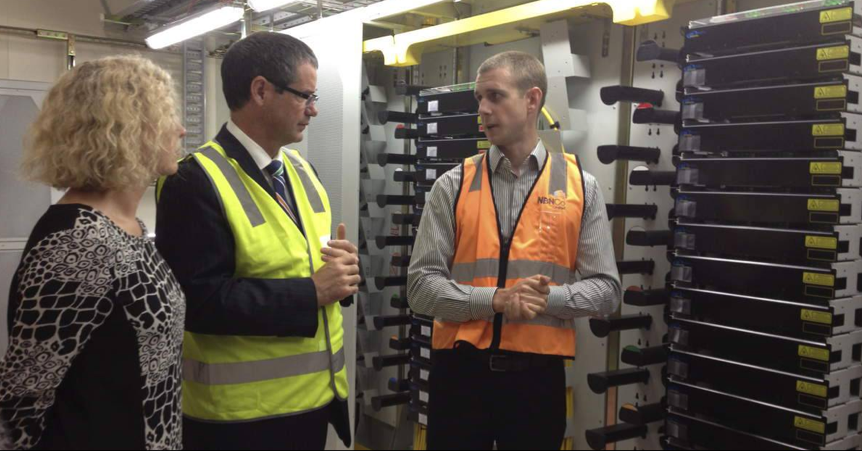 From the Newcastle Herald

SMALL businesses will ‘‘have their lunch cut’’ by new, tech-savvy rivals if they don’t tap into the National Broadband Network and build their online capacity.

The warning came from Senator Stephen Conroy, the federal Minister for Broadband, Communications and the Digital Economy, during a whistlestop visit to the Hunter yesterday.

Visiting an NBN-ready exchange in Hamilton with the federal Member for Newcastle, Sharon Grierson, and federal Labor candidate Sharon Claydon, Senator Conroy said the network would begin to roll out in Newcastle in the second half of this year. ‘‘I wouldn’t want to say in which street and on what day, because we are renting Telstra’s [facilities], so there might be need for remediation, but construction will be commencing,’’ he said.

‘‘Once we start digging in your streets, within 12 months you should get the box on the side of your house and it should go up.’’

By mid-2015 work would be under way or completed for 85,400 homes and businesses in Newcastle and surrounding areas including Charlestown, Mayfield and New Lambton.

Senator Conroy said Newcastle had ‘‘done it tough’’ when the steelworks closed and the NBN was the ‘‘extra piece in the jigsaw to really turbocharge’’   transformation.

He said the message behind the government’s digital enterprise programs, which will train individuals and business to use the NBN,  was ‘‘get on board or miss out’’.

‘‘Eighty-sixper cent of Australians buy online but only a third of businesses have websites,’’ he said.

‘‘Businesses have to take this step otherwise you will have your lunch cut by new businesses coming along.’’

Brendan Brooks, president of the Hunter Digital Industry Growth and Innovation Taskforce (DiGiT), said he had received an assurance that the NBN three-year rollout regions announced last year for Newcastle, Maitland and some areas of Lake Macquarie were ‘‘locked in’’ regardless of the result of the federal election.

‘‘The NBN is very real, and the business community needs to prepare itself to take advantage of this transformational infrastructure in order to pursue competitive advantage,’’ he said.