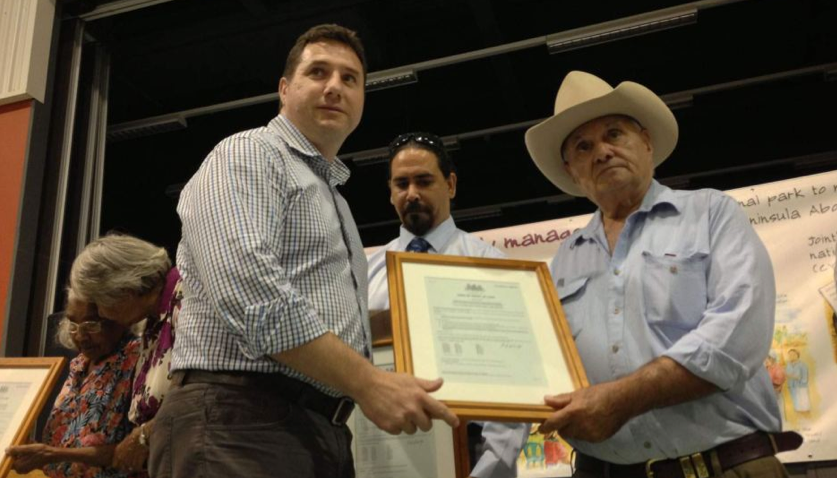 The Queensland Government has transferred seven national parks in the state’s far north Cape York region back into Aboriginal ownership.

The transfer has been pending for more than 20 years and covers more than 3,500 square kilometres around Cape Melville, north of Cooktown.

The land will be jointly managed with the State Government.

“I’ve gotten more passionate about up there and I really want to stick it out and show the rest of Australia that us people from this part of Cape York really want to do a real good job,” he said.

“I feel like a bit more ownership has fallen onto our shoulders.

“I’ve grown a lot and learnt a lot so it’s quite different to pulling spanners.”

“We will do joint ventures with these Indigenous groups so that they can deliver fantastic ecotourism opportunities,” he said.

“They can start to get income from these areas and grow a future for their people.”

“I’ve been associated with this land claim for nearly 30 years,” he said.

“It’s been a hard struggle, a hard road we followed down the track, but we persevered.”

Mr Hart says it is a great opportunity but such ventures will take time to set up.

“It’s going to be a little bit slow because I think a lot of our people need to build their confidence and build their education level up a little bit to sort of think ahead to start doing stuff like that in the future,” he said.

He began work with traditional owners in 1992 to lodge the original claim for part of the land.

Mr Pearson says many of the local people have since passed away.

“I am roiled by great emotions about the length of time this has taken,” he said.

“I have a sense of regret and guilt about it.

“When I started that process I was 28 years old – not a grey hair in sight.

“I’m bitter – not about the loss of that black hair – I’m bitter about how long justice has taken.”