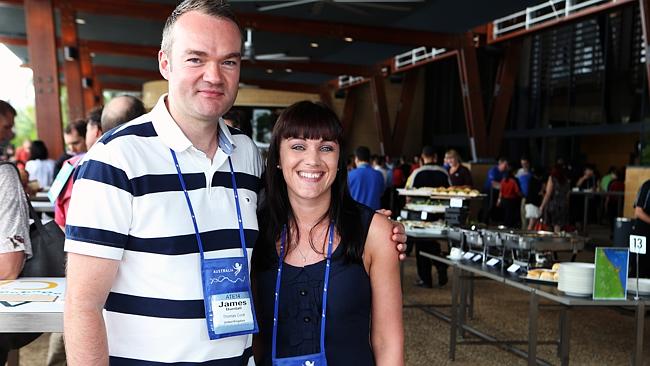 AT ATE: James Burdall and Emma Pritchard from the UK. Source: News Limited

TOURISM experts in Cairns for the country’s biggest trade show have weighed in on the proposed Aquis mega-resort plan, with some warning the region’s reputation could be affected if it goes ahead.

Delegates at the Australian Tourism Exchange yesterday had a mixed response to Hong Kong billionaire Tony Fung’s ambitious plan to build the mega-resort on rural land at Yorkeys Knob.

ALARM AT HANDPASS ON AQUIS

UK product manager Esther Ward said if the resort went ahead it was likely to deliver flow-on benefits to other parts of the region’s tourism market by adding more flights into Cairns.

But she warned it had the potential to turn off some of the tourists who were primarily drawn to the region by its natural beauty.

“It would be a shame if it overtook from the rest of the area,” said Ms Ward, who heard about the plan from a local taxi driver.

“Cairns still has a small-town attraction.”

Dutch tour operator Monique van Oosten said she was surprised by the sheer size of the development. “I’m wondering how they would fill the hotels,” she said.

“It looks like it will have a lot of impact on the city.”

Il-Min Nam, from South Korea, backed the proposal, saying it would help cement the Far North’s reputation as a tourist location.

“It’s a great idea. I think it will be really good for travellers,” he said.

“It would help to have some more hotels in Cairns.”

UK-based tour operator James Burdall said it had the potential to attract English and European travellers over time, in a way similar to South Africa’s luxury Sun City resort, north of Johannesburg.

But Mr Burdall said the developers would have to ensure they mitigate any impacts it would have on nearby areas such as Palm Cove.

“People come here to relax and having all this extra traffic might spoil its appeal,” he said.

US travel agent Jamie Griego said the project had the potential to inject a range of economic benefits into the city if it went ahead.