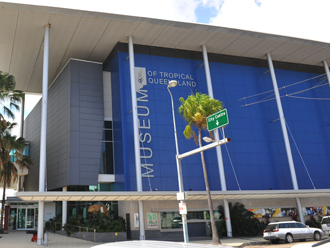 From the Townsville Bulletin

TOWNSVILLE residents can no longer visit the Museum of Tropical Queensland for free after the council reduced its funding.

The city’s locals will now pay $7.50 – half price of general admission – following the axing of the Council Community Pass.

After the Community and Cultural Committee yesterday voted to approve the changes in funding, Cr Vern Veitch queried why the State Government did not contribute more to the museum.

“Neither the Ipswich, Toowoomba or Brisbane councils contribute to the cost of museums, so I have to ask why our residents are being disadvantaged,” he said.

The Council Community Pass had been in place since 2003, and the museum had made an application to the council several times to continue the sponsorship deal.

“We want to ensure that as many residents as possible have the opportunity to visit and support the museum just as they have through the council’s funding agreements in the past,” she said.

“Council has been MTQ’s biggest supporter and over the past nine years we have provided funding totalling more than $1.5 million to the museum to underwrite admission to their wonderful exhibitions and programs for Townsville residents.

“While our support will remain high under the new agreement, funding will reduce slightly over the next three years as we encourage MTQ, which is a state museum, to rely less on council funding and look at other ways of achieving a more sustainable business.”

Under the new arrangements, the museum will offer an annual $15 membership, with general admission free for members.

“With locals joining us as members to support and become part of their museum, we will continue to be able to provide a strong schedule of exhibitions, programs and events for Townsville locals,” museum director Peter McLeod said.

The Queensland Museum Network would not give the Bulletin a breakdown of State Government funding for each of the museums it operates.

The network received $21,674,000 in 2012-13 from the State Government to fund the operation of four museums – including the Museum of Tropical Queensland.

The committee recommendation will be considered by a meeting of the full council on March 26 with an expected introduction of the new fees on April 30.