Tourists driven into the backyards of strangers 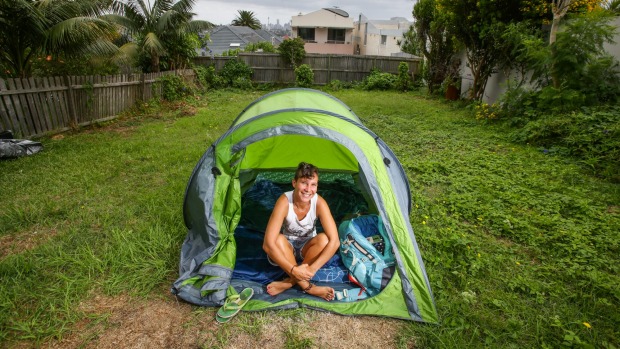 Kim Boutard has been sleeping in a tent in a Sydney backyard for about a week, even though she had never met the owner before she turned up at his door.

Puffing under the weight of the hefty backpack she had lugged around the Australia’s east coast for six months, the French tourist waved her passport and smartphone at him, and they chatted as she went out back to set up camp.

The owner is one of several hundred Sydneysiders offering up their backyards to tourists who want somewhere central and affordable to stay while travelling through one of the world’s most expensive cities.

“It would be a bit weird if someone wanted to camp in the garden full time, but it’s a great idea for backpackers or small families,” he said.

It’s costing Ms Boutard only $30 a night to stay in Dover Heights, with a view of the harbour that rivals some of Sydney’s plusher hotels. The pair found each other through a new website called Home-Camp, which connects travellers with home owners. Campers have stayed in areas such as Manly, Dee Why, Maroubra, Newcastle and Byron Bay.

With soaring real estate prices, high rents and a national accommodation industry that rakes in more than $6 billion every year, it seems inevitable citizen-supplied websites such as HomeCamp, Airbnb and Couchsurfing would take off.

More than 1000 homes and rooms in Sydney are listed on Airbnb since the company launched in Australia in 2013. Hundreds of less luxurious options are available on the Couchsurfing site.

These companies pay their way by taking a small cut of the rent paid to the home owners and opened up a vast trove of more affordable accommodation. But until now, no one was trying to turn gardens into the next generation of hotel rooms.

Ms Boutard said backyard borrowing offers a benefit beyond the cash saved: the opportunity to stay in a “less touristy” spot.

“Every backpacker wants freedom, and to occasionally have a break from crowded group hotel rooms. And this way, I can stay among locals who tell me where is best to go.”

But the new initiative may run into regulatory issues, as the NSW Department of Planning and Environment requires caravan sites or camping grounds to be approved by their local council.

Usually, approval under Section 68 of the Local Government Act 1993 is contingent on the site complying with a wide range of legislation including access to amenities and fire safety.

A site may be exempt from these rules if there are fewer than two tents on it for a maximum of 60 days a year.

A spokesman for Waverley Council told Fairfax Media that residents who want to rent parts of their property as short-term accommodation would need to seek approval.

“Council investigates complaints about the illegal use of properties, which are being used as short term accommodation without approval.

“Where appropriate fines are issued and in some cases legal action is taken.”