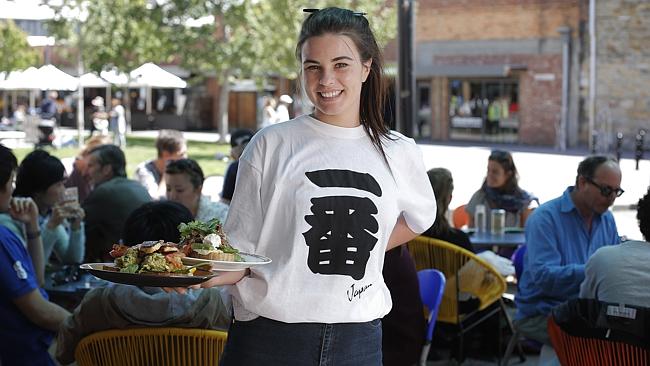 “HOBART is dead” is a typical refrain on a public holiday, but for Salamanca Place eateries that opened yesterday the ­reward was ringing tills.

The issue of penalty rates is cited before every public holiday as a reason for cafes and restaurants remaining closed.

But there was no sign of Salamanca being closed for business yesterday.

Almost every cafe and restaurant was open and bustling with customers.

But the picture was very different in the CBD, with many cafes and smaller shops closed.

Many large chain retailers were open.

The North Hobart restaurant strip was also fairly quiet with only a handful of venues open, and some cafes were closed in Battery Point.

Venues at Salamanca serving breakfast were overflowing from the start of the day with busy trade continuing through lunch.

A 10 per cent surcharge was being added to bills in most cases but but that did not seem to deter customers. Crowds start to build in and around Salamanca in anticipation of the Australia Day festivities.

Machine Laundry Cafe manager Jacinta Norris said the cafe used to impose a public holiday surcharge but had dropped it a few years ago.

The popular cafe was busy all day yesterday.

The restaurateur hinted at the reason some restaurants stayed open on a day when they were unlikely to reap their usual profit – a sense of duty to ­locals and tourists.

“Maldini has always been here and is always open, but I can understand why people close,” he said.

“We’re right in the heart of things so we stay open.”

Mr Di Tommaso estimated that about half the people who visited Maldini’s yesterday were locals.

The renewed debate has ­escalated the fight between ­industry groups – who say penalty rates cripple business – and unions and welfare groups who argue that hospitality workers, many of whom are lowly paid casuals, ­deserved fair compensation for working when everyone else had a day off.