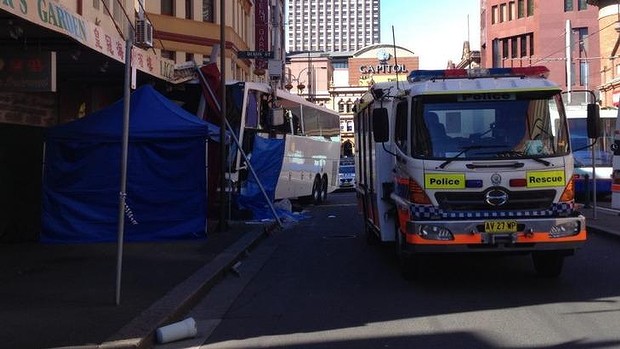 A man who may have been a sketch artist died after being struck by a coach that lurched into a popular Chinese restaurant in Haymarket on Sunday.

The incident was the latest in a string of pedestrian deaths in Sydney, and part of a recent trend of serious bus crashes.

Witnesses say the man appeared to be killed instantly when the coach left Hay Street in Haymarket, mounted the footpath, and crashed into the Emperor’s Garden restaurant on Dixon Street about midday on Sunday.

Peter Henphill, who was standing near the man when he was struck by the bus, said he appeared to be a sketch artist, aged in his late 20s and of Asian origin.

“All his sketches were under the bus with him,” Mr Henphill said. “They were portraits of people, headshots. They were all scattered everywhere.”

Buses are one of the biggest killers of pedestrians in Sydney’s central business district. Figures obtained using freedom of information laws show they are responsible for almost half of all pedestrian deaths in the city, despite making up 10 per cent of traffic volumes.

Prior to Sunday’s incident, there had been 11 fatal collisions between vehicles and pedestrians in Sydney’s CBD. Five of them had involved buses.

Robert Clarke saw the coach veer into the restaurant on Sunday from his vantage at the Covent Garden pub across Dixon Street.

Mr Clarke said the bus had “virtually stopped” on Hay Street. It then moved again and collided with the restaurant. Had the outdoor dining area of the restaurant been busy, more people could have been seriously injured.

“There was no screaming, no nothing,” Mr Clarke said.

“He wasn’t going fast, just slowly came across and for some reason veered into there,” he said of the bus driver.

Another witness, Michelle Sager, says the victim was standing on the footpath when struck by the bus.

“It wasn’t speeding, it just lost control,” she said.

“The bus took out the awning and I didn’t think it was going to stop.

“And then they tried to reverse off [the pedestrian] but that didn’t work either,” said Ms Sager.

“He was dead straight away”.

Mr Henphill saw the driver get out of the vehicle after the accident. “He was shocked,” said Mr Henphill.

The coach was from the Imperial Pacific Coaches company, based in Brisbane and the Gold Coast. At the time of the incident, witnesses said the driver was either in the coach alone or with one other person. He was taken to hospital to be treated for shock and to undergo mandatory drug and alcohol testing.

Last Thursday, a cyclist was killed after a collision with a bus at Neutral Bay.

As of Sunday afternoon, police had not identified the man killed by the coach.