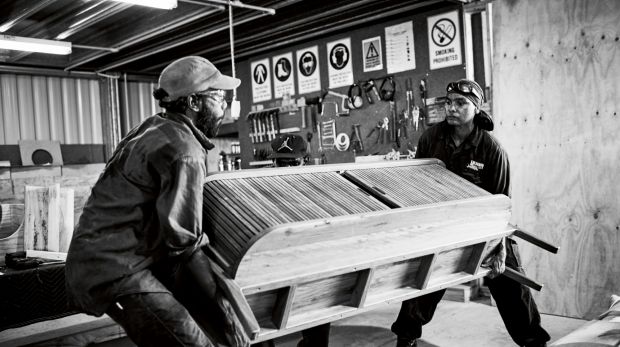 It is stifling hot and the humidity is 100 per cent. Ceiling fans take the edge off the heat. However, for the Indigenous cabinetmakers, working from a shed on remote Milingimbi Island, in Arnhem Land, a new high-end furniture enterprise called Manapan, has given its Yolngu community a new lease of life. “It’s a magical moment,” says Keith Lapulung, the chair of the Indigenous-owned Manapan Furniture. “It has reshaped and re-energised our community. It’s taken us into the 21st century.”

However, not everything is state of the art. Furniture produced on the island needs to be barged out and machinery in. Every tool that needs sharpening has to be transported to Darwin, 500 kilometres away. Originally a workshop making wooden coffins, the craftspeople are now collaborating with some leading Melbourne furniture designers to produce complex and labour intensive handcrafted furniture aimed at the top of the domestic and commercial markets.

Central to the project is Mark White, the founding director of Melbourne shop-fitting operation Ramvek, who has worked with some of the world’s top-end retailers, including Louis Vuitton and Gucci.

After performing an advisory role for the Arnhem Land Progress Aboriginal Corporation(ALPA) for a number of years, White wanted to “give back” to the community on Milingimbi Island. He wanted to mimic the type of specialisation found in Chinese cities, where some of his joinery is produced.

But China and Milingimbi Island are worlds apart. The climate, as well as the experience of the workforce, are vastly different. Many Milingimbi locals have never left the island.

The initiative fell under the umbrella of the federal government’s Community Development Program (CDP), which aims to support Indigenous job seekers in remote communities. Specialists involved included Rob Crisfield, a master craftsman who previously ran a furniture business in Melbourne, and Chris Haywood, the manager of strategy, stakeholder engagement and business development at the ALPA.

Five Indigenous staff, in their 20s and 30s, form the core of a team of 14 working in what White refers to as the “men’s shed”. Initially, the workshop focused on basic timber coffins and simple furniture, such as well-made boardroom tables and chairs. But then designer Jon Mikulic, director of Newline Designs, suggested that the next step should be a  “superior high-end product”. Manapan, a local word meaning “coming together”, now boasts a small collection of furniture using Darwin stringybark and other Australian timbers. But forget about the boomerang-shaped tables. This tight and beautiful collection expresses the voices of the makers and the creators.

White’s current focus is providing the practical training in furniture-making with the aim of the workers eventually running the Manapan business.  “We’re teaching them trade-based skills along with general business skills. We’re not pushing design, but we would certainly encourage this if any of the guys express an interest.”

The artistry and environment of the Milingimbi community is expressed in the Manapan designs. The main material for the crocodile lamp, for example, is a termite-hollowed log. “This is similar to hunting for the right tree to make didgeridoos from. Traditional skills are also used to create the Art bench, (which features painted wooden spears),” White says.

Orders are coming in. The East Arnhem Land Regional Council recently placed a $23,000 order for office furniture. Council president Banambi Wunungmurra is delighted local timbers, unique to the region, are being used. “It’s important to use our own resources. That makes this furniture so unique. We see this land not only for producing food, but also for the things that are made here, whether it’s a basket made from the paper bark or the stringybark used for Manapan’s furniture,” Wunungmurra says. “It’s important to know where things come from.” A showroom has opened in Melbourne’s South Yarra and furniture can be viewed, of course, on the internet.

Designer Mikulic sees the project as “about two cultures coming together”, pointing out the juxtaposition of the delicately placed spears at one end of his Art Bench, and the chunky base of river gum at the other. “Each piece is unique, whether it’s the painting of each spear or the grain of the timber. I see this piece sitting in an office lobby or as a welcoming piece in one’s home.” Other designers involved include furniture and lighting designer Suzie Stanford, interior designers Liz Doube and Chloe Wolbran, interior designer Ashleigh Parker and relative newcomer Alexsandra Pontonio, who has received several awards since studying furniture design at Melbourne’s RMIT.

It’s a magical moment. It has reshaped and re-energised our community.

“I knew that we couldn’t compete with China, particularly on price, ” says White, who regularly visits Arnhem Land. The Manapan pieces range from $1150 for a light by Stanford to $10,500 for a sideboard by Ashleigh Parker. “But we could create furniture that ‘touches a nerve’ and borders on art.”

White is in awe of the local women’s skills in weaving dried pandanus branches into a textile. f”My brief to the team of designers was to simply create a beautiful piece of furniture, something that was slightly on the cutting edge, but one that tied back to Arnhem Land,” he says. “Importantly, I wanted each piece to convey a story or narrative.” However, equally important was the venture’s need for sustainability; creating jobs in a community where locals are keen to remain. “I want this venture to support not just the current crop of makers, but their sons and grandchildren going forward.” Stanford’s lantern-like Crocodile Lamps, one designed as a table lamp, the other for the floor, evoke the skin of the crocodiles of the region. Made from Darwin stringybark, the timber has been fashioned to appear skin-like with all the expected protrusions and troughs.

“The light emitted from these lamps reminds me of the local Indigenous community sitting around the camp fires, celebrating the fire, with all its burning embers,” says Stanford, who sees her designs as “bush television”. While Stanford didn’t travel up north, she was inspired by her research at the State Library Victoria in Melbourne. She found that Milingimbi Island is the largest in the Crocodile Island group of islands and it has the largest population of saltwater crocodiles in Australia. This setting is a long way from Stanford’s roots, an investment banker based in London, who turned to creating contemporary jewellery for fashion doyen Paul Smith’s stores worldwide. For almost a decade, her distinctive tea towel-covered armchairs were sold at London’s upmarket Liberty department store.

Chloe Wolbran, incorporated woven pandanus on the front of her credenza, Woven Cabinet, a solid unit made from stringybark that could sit comfortably in a sleek minimal warehouse or a home filled with eclectic objects and artefacts.

“I looked very carefully at how these textiles were produced, ending up as mats, baskets and for fishermen making their catch,” Wolbran says. Doube’s Fossil Table is made from the local tiwi timber, inset with marble and leather. “It started with a series of sketches, then 3D CAD files and an understanding of what could and also what couldn’t be realistically achieved,” Doube says.

Not surprisingly, White and his team of creators and producers have set themselves a high benchmark for Manapan. Only about 50 pieces of furniture are expected to be made each year, at least in the immediate future, as each one takes at least three weeks to produce. Nevertheless, White is dreaming big. “I would love to eventually see one piece of the Manapan collection in every Australian consul general’s office worldwide, in corporate foyers, in galleries and museums, in private collections … and perhaps even one day exhibited at the Furniture Fair in Milan!”